Oil prices remain little changed even as the Organization of the Petroleum Exporting Countries (OPEC) and its allies pledge to cut production by 1.2M b/duntil the end of June, and crude may continue to consolidate even though Russia Minister of Energy, Alexander Novak¸ endorses a price range of $55-65 as it holds the monthly opening range. 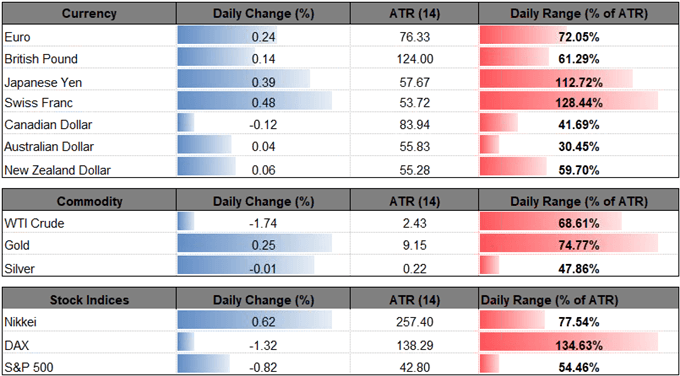 OPEC’s 175th meeting appears to have stabilized crude prices as the group takes additional steps to rebalance the energy market, and oil may stage a more meaningful recovery over the near-term as the International Energy Agency (IEA) warns that the economic slowdown in Venezuela paired with the sanctions on Iran may lead to unintended consequences that would exacerbate the drop in global output.

At the same time, the most recent updates from the U.S. Energy Information Administration (EIA) show weekly production of crude narrowing for the first time since late-October, with the figure slipping to 11,600K from 11,700 in the week ending November 30.

With that said, signs of waning non-OPEC supply may also help to keep oil afloat, but the weakening outlook for the global economy may continue to produce headwinds for crude as OPEC’s Monthly Oil Market Report (MOMR) adamantly warns of slowing consumption in 2019. 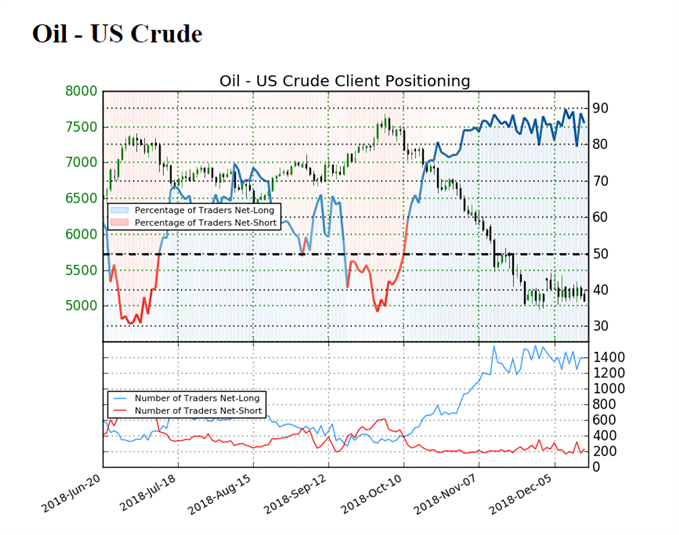 Keep in mind, the IG Client Sentiment Report still shows 85.9% of traders are still net-long crude compared to 84.9% last week, with the ratio of traders long to short at 6.1 to 1. In fact, traders have been net-long since October 11 when oil traded near the $71.00 mark even though price has moved32.7% lower since then. The number of traders net-long is 3.2% higher than yesterday and 1.3% higher from last week, while the number of traders net-short is 2.1% lower than yesterday and 8.1% lower from last week.

Profit-taking behavior may explain the decline in net-short interest at oil prices approach the lower bounds of its recent range, but the ongoing tilt in retail position provides a contrarian view to crowd sentiment as traders bet on a larger recovery. With that said, the broader outlook for crude oil remains tilted to the downside as it snaps the upward trend from earlier this year, but the range-bound price action is likely to persist over the near-term as the Relative Strength Index (RSI) bounces back from oversold territory and clings to the bullish formation carried over from the previous month. Sign up and join DailyFX Currency Analyst David Song LIVE for an opportunity to discuss potential trade setups. 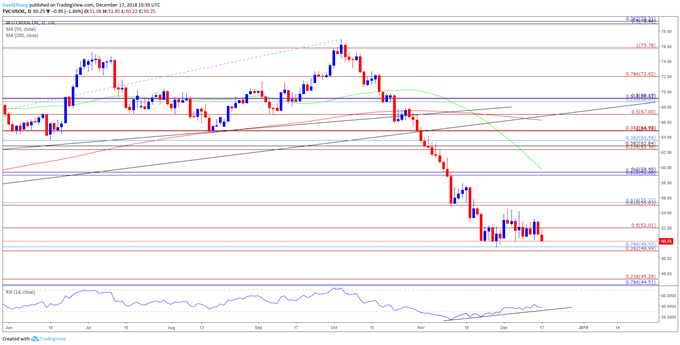