Oil prices appear to have found a floor as the Organization of the Petroleum Exporting Countries (OPEC) and its allies plan to reduce out by 1.2M b/d until the end of June, but the weakening outlook for demand casts a long-term bearish outlook for crude, with recent price action warning of range-bound conditions. 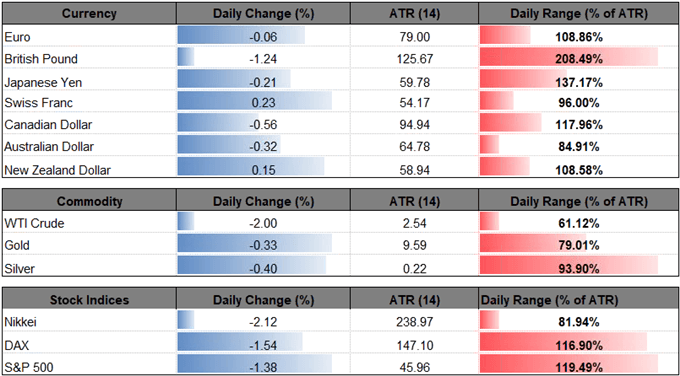 Recent efforts by OPEC and its allies may keep oil prices afloat as Russia Minister of Energy, Alexander Novak¸ endorses a price range of $55-65/bbl, and it seems as though the alliance will persist throughout 2019 especially as the U.S. and China, the two largest consumers of crude oil, struggle to reach a trade deal. 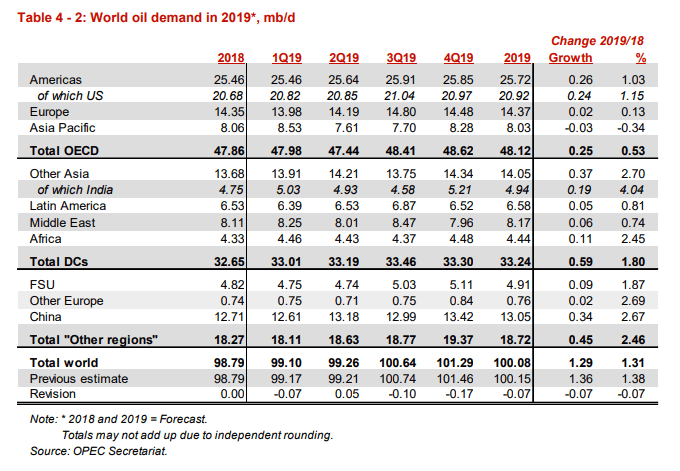 Keep in mind, OPEC’s Monthly Oil Market Report (MOMR) continues to warn of slowing consumption in 2019, with the updates for November 2018 noting ‘world oil demand growth is forecast to grow by 1.29m b/d y-o-y, about 70,000 b/d lower than last month’s projection,’ and the group may continue to adjust production over the coming months as therenewed sanctions on Iran fuel the ‘uncertainties regarding the overall global economic development.’

With that said, OPEC and its allies may continue to push for stable prices ahead of the next meeting in April 2019, but sentiment surrounding crude remains skewed as the retail crowd continues to bet on higher oil prices. 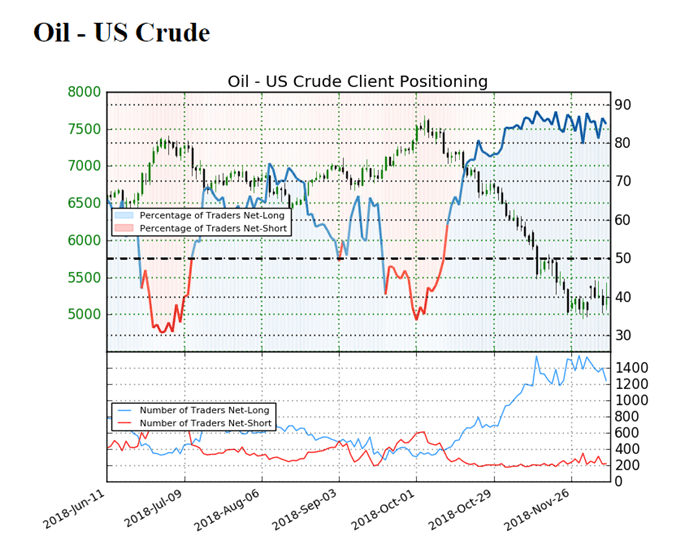 The IG Client Sentiment Report shows 84.9% of traders are still net-long crude compared to 81.8% last week, with the ratio of traders long to short at 5.63 to 1.In fact, traders have been net-long since October 11 when oil traded near the $71.00 mark even though price has moved31.4% lower since then. The number of traders net-long is 12.1% lower than yesterday and 17.4% lower from last week, while the number of traders net-short is 1.8% higher than yesterday and 12.6% lower from last week.

The decline in market participant points to profit-taking behavior as the OPEC meeting fails to fuel the rebound from the 2018-low ($49.44), but the ongoing tilt in retail position provides a contrarian view to crowd sentiment as traders bet on a larger recovery. In turn, the broader outlook for crude oil remains tilted to the downside as it snaps the upward trend from earlier this year, but the range-bound price action is likely to persist over the near-term as the Relative Strength Index (RSI) bounces back from oversold territory and clings to the bullish formation carried over from the previous month. Sign up and join DailyFX Currency Analyst David Song LIVE for an opportunity to discuss potential trade setups. 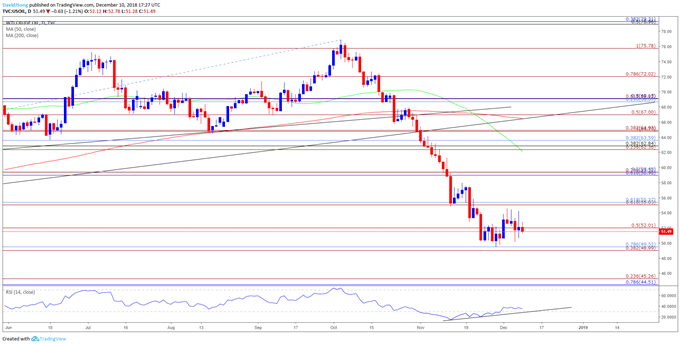