Updates to New Zealand’s Balance of Payments (BoP) may keep NZD/USD afloat as figures are anticipated to show a narrowing trade balance deficit in October, but the advance from the monthly-low (0.6514) may continue to unravel as the bullish momentum carried over from the previous month starts to abate. 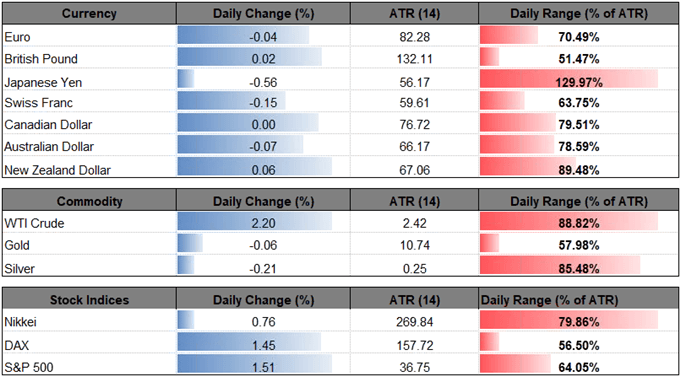 The near-term correction in NZD/USD appears to be stalling ahead of the Group of 20 (G20) Summit slated for the end of the month as the U.S. and China struggle to reach a trade deal, and the New Zealand dollar stands at risk of facing headwinds ahead of the next Reserve Bank of New Zealand (RBNZ) meeting on February 12 as the central bank remains in no rush to lift the official cash rate (OCR) off of the record-low.

A minor improvement in New Zealand’s trade balance may do little to alter the monetary policy outlook as the RBNZ warns that ‘downside risks to the growth outlook remain,’ and it seems as though Governor Adrian Orr & Co. is in no rush to switch gears as officials ‘expect to keep the OCR at this level through 2019 and into 2020.’ It seems as though the RBNZ will continue to strike a dovish forward-guidance for monetary policy amid the ‘risk that trade barriers increase and undermine global growth,’ and the central bank may ultimately brace for a weaker exchange rate as ‘implied expectations for the OCR based on market pricing have declined.’ 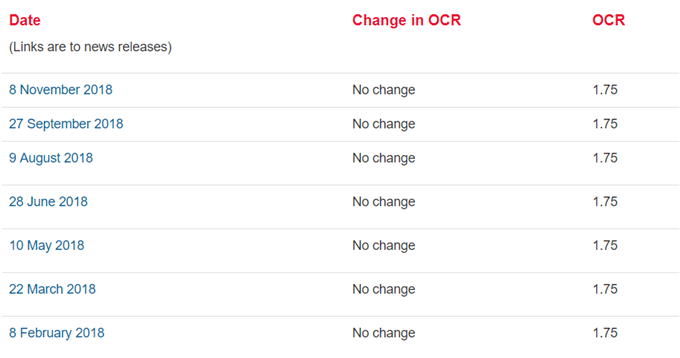 In turn, the RBNZ’s wait-and-see approach instills a long-term bearish outlook for NZD/USD especially as the Federal Reserve is widely expected to deliver a 25bp rate-hike in December, and recent price action raises the risk for a further decline in the exchange rate as it extends the string of lower highs & lows from late last week. Sign up and join DailyFX Currency Analyst David Song LIVE for an opportunity to discuss potential trade setups. 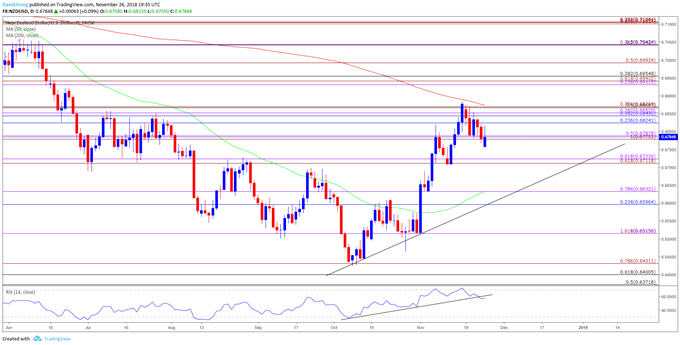