Crude slides to a fresh yearly-low ($50.64), with the spill likely to put pressure on the Organization of the Petroleum Exporting Countries (OPEC) to clamp down on production, but the current environment may keep oil prices under pressure as the Relative Strength Index (RSI) sits in oversold territory. 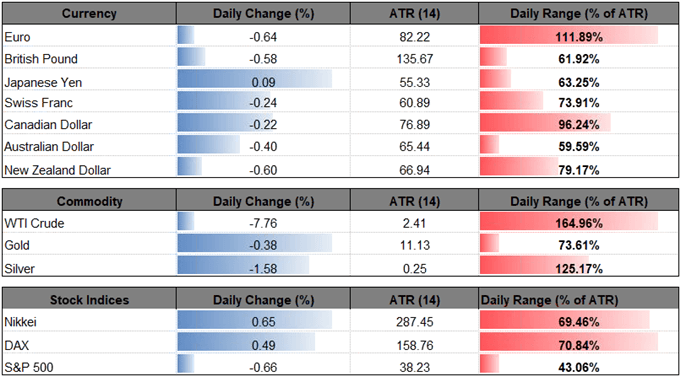 It seems as though there’s growing interest surrounding the next OPEC meeting on December 6 as the United Arab Emirates pledges ‘to cut production,’ with Saudi Arabia considering a more clandestine approach in reducing supply according to the Wall Street Journal.

The headlines suggest OPEC is growing impatient and will continue to respond to falling oil prices even though Alexander Novak, the Minister of Energy of the Russian Federation, wants to ‘see how the situation develops,’ and the group may ultimately deliver an official response to stabilize crude prices amid the weakening outlook for world demand. Until then, oil remains vulnerable to further losses as the bearish momentum appears to be reasserting itself, and the weakness in energy prices may fuel a broader change in market behavior amid the ongoing skew in retail interest. 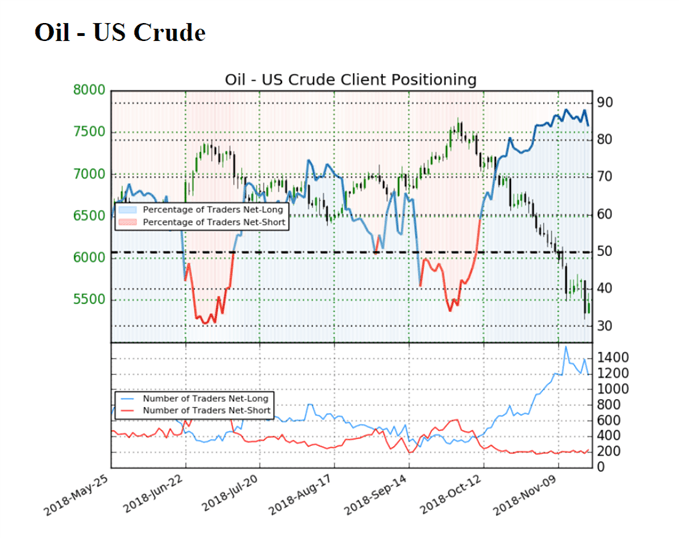 The IG Client Sentiment Report shows 83.7% of traders are still net-long crude compared to 87.4% last week, with the ratio of traders long to short at 5.12 to 1. In fact, traders have been net-long since October 11 when oil traded near the $71.00 mark even though price has moved26.4% lower since then. The number of traders net-long is 10.3% lower than yesterday and 12.8% lower from last week, while the number of traders net-short is 17.9% higher than yesterday and 7.9% higher from last week.

Despite the rise in net-short position, the ongoing tilt in retail position provides a contrarian view to crowd sentiment as traders continue to bet on a near-term recovery. Nevertheless, crude may face a more bearish fate going into 2019 as it snaps the upward trend from earlier this year, with the Relative Strength Index (RSI) warning of a similar dynamic as the oscillator struggles to bounce back from oversold territory. Sign up and join DailyFX Currency Analyst David Song LIVE for an opportunity to discuss potential trade setups. 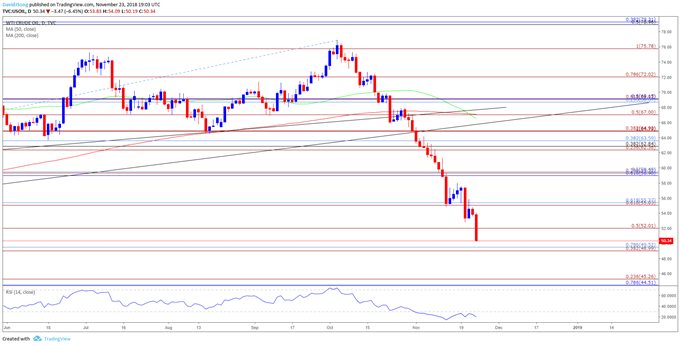