AUD/USD remains under pressure as lackluster data prints coming out of China, Australia’s largest trading partner, cast a weakened outlook for the Asia/Pacific region, and the exchange rate may ultimately trade to fresh yearly lows as it extends the bearish sequence from the previous week. 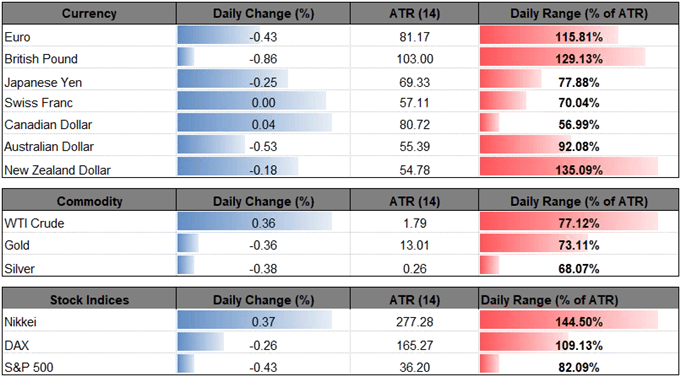 Updates to China’s Gross Domestic Product (GDP) report appear to have dampened the appeal of the Australian dollar as the economy expands at the slowest pace since 2009, and the softening outlook is likely to keep the Reserve Bank of Australia (RBA) on the sidelines as ‘developments in international trade policy continued to be a source of uncertainty.’

In turn, Governor Philip Lowe & Co. may stick to the same script at the next meeting on November 6 as ‘there was no strong case for a near-term adjustment in monetary policy,’ and it seems as though the RBA will carry the record-low cash rate into 2019 as ‘household income growth had been subdued and this continued to be an important source of uncertainty for the outlook for consumption and inflation.’

With that said, the diverging paths for monetary policy continues to cast a long-term bearish outlook for AUD/USD especially as a growing number of Federal Reserve officials show a greater to extend the hiking-cycle, and a pickup in market volatility may spur a further shift in retail sentiment as traders appear to be betting on a larger recovery. 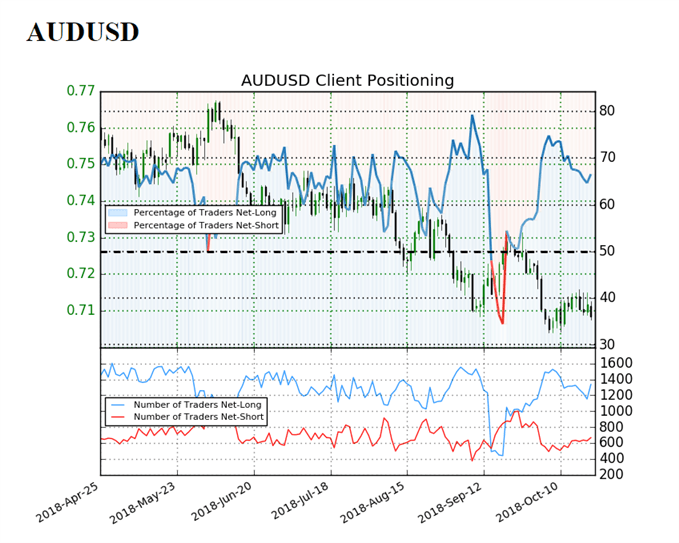 The IG Client Sentiment Report shows retail interest still near extremes as 65.7% of traders are net-long with the ratio of traders long to short at 1.92 to 1. In fact, traders have remained net-long since September 24 when AUD/USD traded near 0.7270 even though price has moved 2.8% lower since then. The number of traders net-long is 14.7% higher than yesterday and 3.5% lower from last week, while the number of traders net-short is 7.0% lower than yesterday and 5.1% higher from last week.

The skew in retail position provides a contrarian view to crowd sentiment, with the broader outlook for AUD/USD still tilted to the downside as both price and the Relative Strength Index (RSI) continue to track the bearish formations from earlier this year. Sign up and join DailyFX Currency Analyst David Song LIVE for an opportunity to discuss potential trade setups. 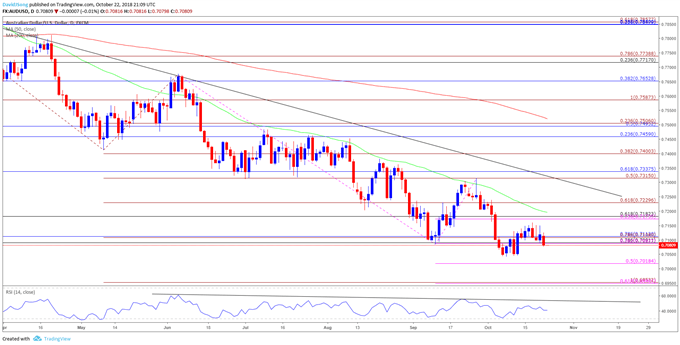