AUD/USD extends the rebound from earlier this week as there appears to be a growing dissent within the Federal Reserve, and recent price action raises the risk for a large recovery as the exchange rate initiates a series of higher highs & lows. 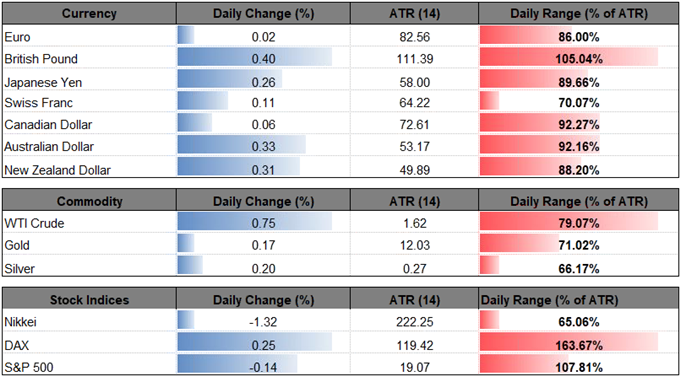 Even though the Federal Open Market Committee (FOMC) is widely anticipated to deliver another 25bp rate-hike at the next quarterly meeting in December, fresh remarks from St. Louis Fed President James Bullard, who rotates into the FOMC in 2019, appears to be gaining attention as the policymaker argues that U.S. interest rates are ‘close to neutral.’

In turn, a growing number of Fed officials may soften the hawkish outlook for monetary policy as ‘there just isn’t that much inflation pressure in the U.S. economy,’ and Chairman Jerome Powell & Co. may continue to project a longer-run interest rate of 2.75% to 3.00% as signs of slowing job/wage growth curb the risk for above-target inflation.

Keep in mind, the broader outlook for AUD/USD remains mired by the Reserve Bank of Australia’s (RBA) reluctance to lift the official cash rate (OCR) off of the record-low, and the central bank’s semi-annual Financial Stability Review is likely to do little to boost the appeal of the local currency as Governor Philip Lowe & Co. continue to endorse a wait-and-see approach for monetary policy.

With that said, it seems as though the RBA will stick to the same script at the next meeting on November 6, and more of the same from the central bank may continue to drag on AUD/USD amid the deviating paths for monetary policy. Moreover, the IG Client Sentiment Report shows retail sentiment back at extremes as73.8% of traders are net-long AUD/USD with the ratio of traders long to short at 2.81 to 1. 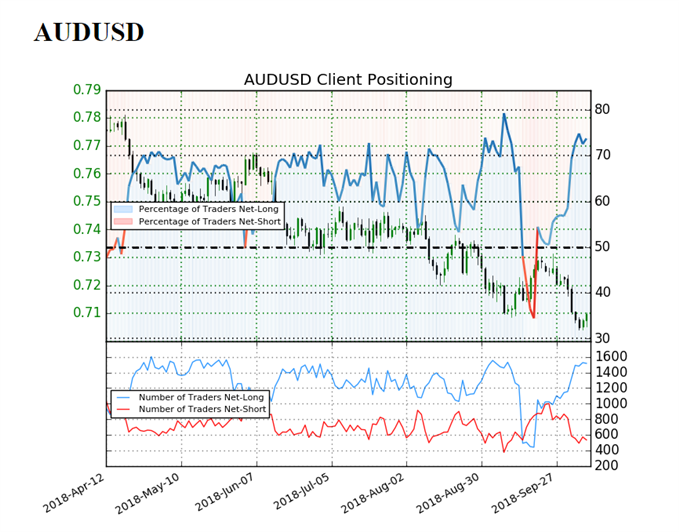 The ongoing skew in retail interest offers a contrarian view to crowd sentiment, with the broader outlook for AUD/USD still tilted to the downside as both price and the Relative Strength Index (RSI) continue to track the bearish formations from earlier this year. However, the bearish momentum may continue to abate as the RSI snaps back ahead of oversold territory, with the failed attempt to break below 30 raising the risk for a larger recovery in the aussie-dollar exchange rate. Sign up and join DailyFX Currency Analyst David Song LIVE for an opportunity to discuss potential trade setups. 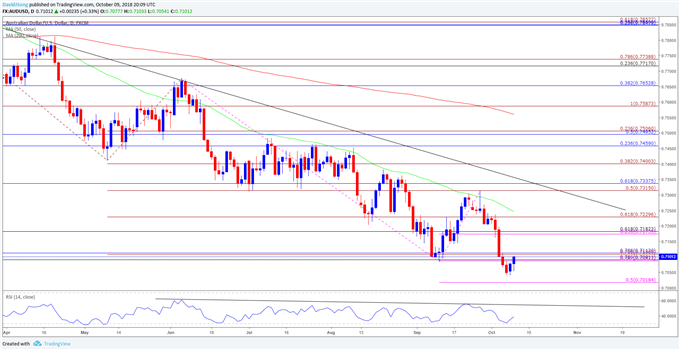