AUD/USD gives back the rebound this month as Australia Prime Minister Malcolm Turnbull struggles to secure his seat, and the exchange rate appears to be on track to test the August-low (0.7203) as it snaps the series of higher highs & lows carried over from earlier this week. 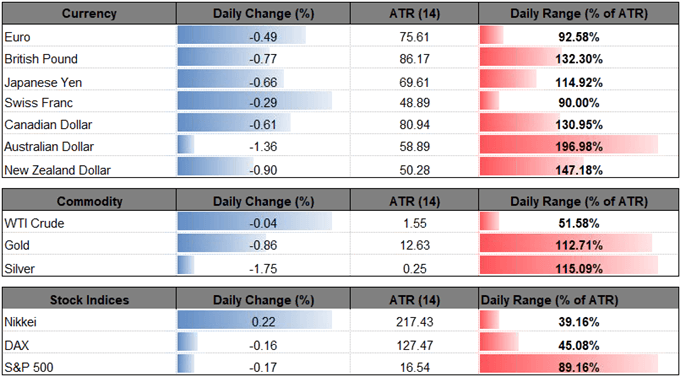 The recent backlash against Mr. Turnbull appears to be dragging on the Australian dollar as it has the potential to alter the monetary policy outlook, and a change in leadership may keep AUD/USD under pressure as it encourages the Reserve Bank of Australia (RBA) to further support the real economy.

The RBA Minutes suggest the central bank will keep the official cash rate (OCR) on hold at the next meeting on September 4 as ‘there was no strong case for a near-term adjustment in monetary policy,’ and Governor Philip Lowe & Co. may stick to the sidelines throughout the remainder of the year as ‘the direction of international trade policy in the United States continued to be a source of uncertainty for the global outlook.’

With that said, the uncertainty surrounding the fiscal outlook may continue to rattle the Australian dollar, and the broader outlook for AUD/USD remains tilted to the downside as the exchange rate fails to retain the summer range, with the Relative Strength Index (RSI) also reinforcing a bearish outlook as it extends the downward trend from earlier this year. Sign up and join DailyFX Currency Analyst David Song LIVE for an opportunity to discuss potential trade setups. 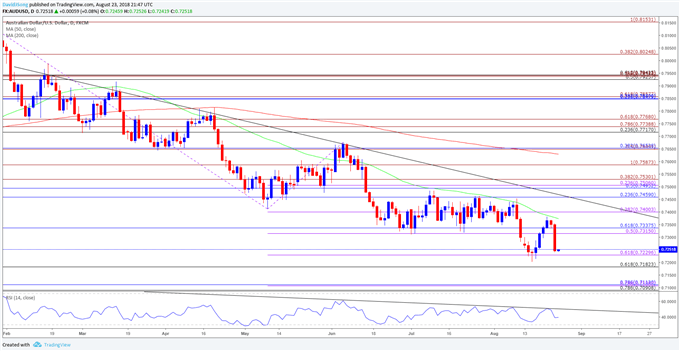