AUD/USD trades on a firmer footing as the Reserve Bank of Australia (RBA) appears to be changing its tune, and the exchange rate now stands at risk of threatening the range bound price action carried over from the previous month as it quickly approaches the July-high (0.7484). 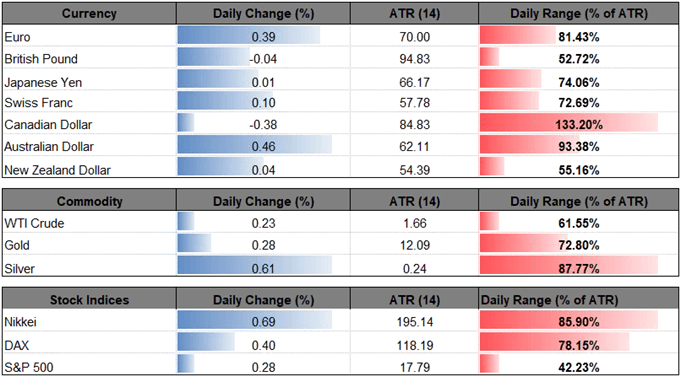 It seems as though the RBA is in no rush to lift the official cash rate (OCR) off of the record-low as ‘once-off declines in some administered prices in the September quarter are expected to result in headline inflation in 2018 being a little lower than earlier expected,’ and the central bank looks poised to retain the current policy at the next meeting on September 4 as ‘the low level of interest rates is continuing to support the Australian economy.’

However, the recent remarks from Governor Philip Lowe & Co. suggest the central bank will gradually alter the forward-guidance for monetary policy as ‘the central forecast is for inflation to be higher in 2019 and 2020 than it is currently,’ and the central bank may start to strike a hawkish tone later this year as ‘the rate of wages growth appears to have troughed and there are increased reports of skills shortages in some areas.’

In turn, Governor Lowe & Co. may prepare Australian households and businesses for a rate-hike in 2019 as ‘further progress in reducing unemployment and having inflation return to target is expected,’ with attention now turning to the RBA’s quarterly Statement on Monetary Policy scheduled for August 10 as market participants digest the minor adjustments in the economic outlook.

Until then, AUD/USD may continue to consolidate as it holds the monthly opening range from July, with the exchange rate at risk of making a run at last month’s high (0.7484) amid the failed attempt to test the July-low (0.7311). 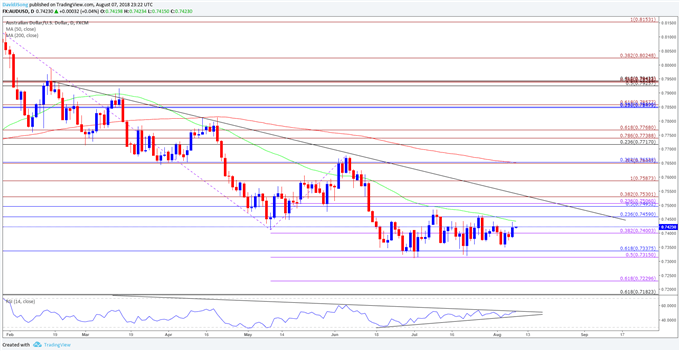