USD/CAD Remains Under Pressure Ahead of FOMC Amid Lackluster U.S. Data

USD/CAD remains under pressure as fresh data prints coming out of the U.S. economy dampen the outlook for inflation, and the exchange rate may buckle going into the Federal Reserve interest rate decision as the bearish momentum appears to be gathering pace. 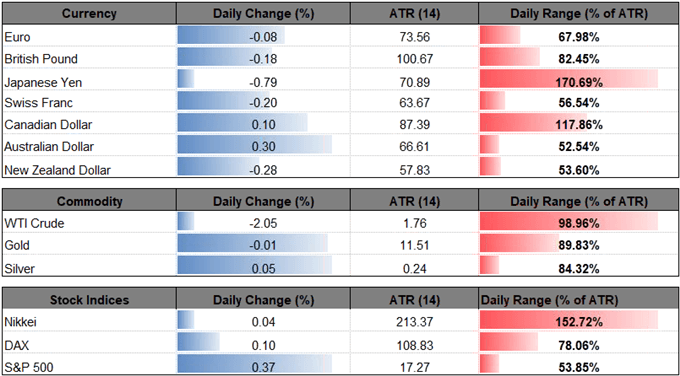 USD/CAD Remains Under Pressure Ahead of FOMC Amid Lackluster U.S. Data

Despite the 0.4% rise in U.S. Personal Income, USD/CAD tags a fresh monthly-low (1.2992) as the core Personal Consumption Expenditure (PCE), the Fed’s preferred gauge for inflation, increases 1.9% in June amid forecasts for a 2.0% print. 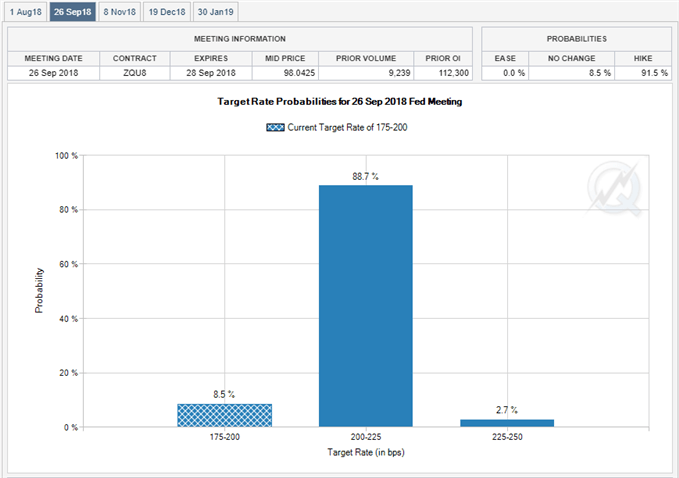 Keep in mind, the data prints should keep the Federal Open Market Committee (FOMC) on track to further normalize monetary policy over the coming months, but signs of limited price growth may encourage Chairman Jerome Powell & Co. to follow a preset course over the remainder of the year as ‘participants generally agreed that the economic expansion was progressing roughly as anticipated, with real economic activity expanding at a solid rate, labor market conditions continuing to strengthen, and inflation near the Committee's objective.’

In contrast, updates to Canada’s Gross Domestic Product (GDP) report may push the Bank of Canada (BoC) to alter the forward-guidance for monetary policy as the growth rate expands 2.6% per annum in May versus projections for a 2.3% clip, and signs of a more robust economy may push Governor Stephen Poloz & Co. to adopt a more hawkish tone at the next meeting on September 5 as ‘Governing Council expects that higher interest rates will be warranted to keep inflation near target.’

With that said, the recent shift in USD/CAD behavior may continue to materialize over the coming days especially as the FOMC is widely expected to keep the benchmark interest rate on hold it August, and more of the same from Fed officials may weigh on the dollar-loonie exchange rate as it curbs bets for four rate-hikes in 2018. In turn, USD/CAD stands at risk for a larger correction as it snaps the upward trend from earlier this year, with the downside targets coming back on the radar as the Relative Strength Index (RSI) extends the bearish formation carried over from the previous month. 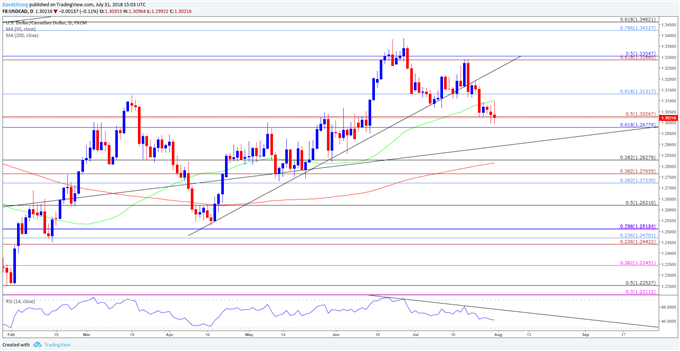