NZD/USD tumbles to a fresh yearly-low (0.6701) to start off July, and the pair appears to be on track to test the May 2016-low (0.6675) as the bearish momentum gathers pace. Even though the economic docket remains fairly light ahead of the major U.S. holiday, recent price action keeps the downside targets on the radar especially as the Relative Strength Index (RSI) pushes deeper into oversold territory. 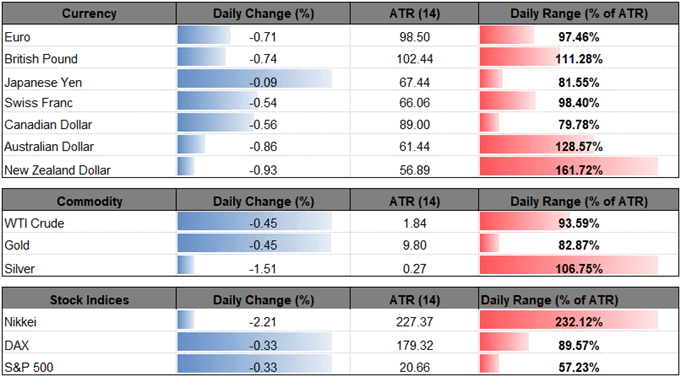 It seems as though the bearish NZD/USD behavior ensuing the Reserve Bank of New Zealand (RBNZ) interest rate decision will persist as Governor Adrian Orr & Co. remain in no rush to lift the official cash rate (OCR) off of the record-low, and the growing trade spat between the United States and China is likely to keep the RBNZ on hold at the next meeting on August 9 as it dampens the economic outlook for the Asia-Pacific region.

With that said, the RBNZ is likely to reiterate that the central bank is ‘well positioned to manage change in either direction – up or down – as necessary,’ and recent developments in NZD/USD raises the risk for a further decline in the exchange rate as it carves a bearish engulfing, while the RSI trades in oversold territory for the second time in 2018.Sign up and join DailyFX Currency Analyst David Song LIVE for an opportunity to discuss potential trade setups! 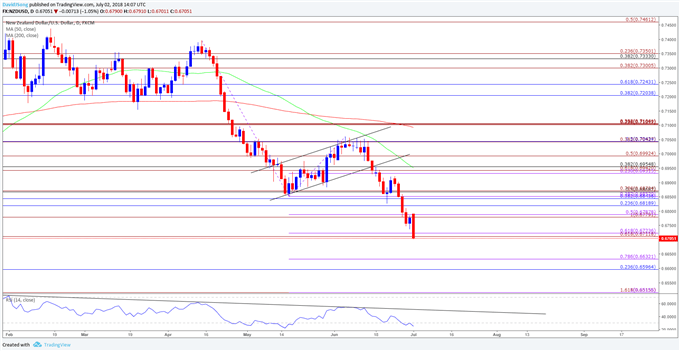