EUR/USD slips to a fresh weekly-low (1.1531) as the European Central Bank (ECB) endorses a dovish outlook for monetary policy, and the euro-dollar exchange rate stands at risk for further losses as the Governing Council appears to be in no rush to normalize monetary policy. 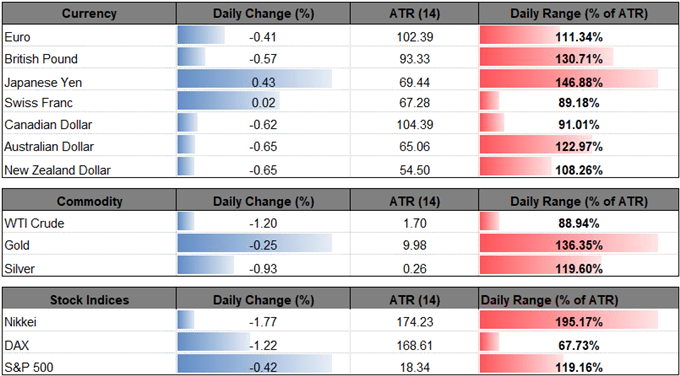 The ECB looks poised to retain the zero-interest rate policy (ZIRP) throughout the remainder of the year as officials struggles to achieve their one and only mandate for price stability, and the Governing Council may continue to tame bets for a higher borrowing-costs as President Mario Draghi insists that the central bank ‘will remain patient in determining the timing of the first rate rise and will take a gradual approach to adjusting policy thereafter.’

The comments suggest the ECB will keep the door open to further support the monetary union as the quantitative easing (QE) is now set to expire in December, and the lack of urgency to move away from the easing-cycle may continue to produce headwinds for EUR/USD especially as the Federal Open Market Committee (FOMC) shows a greater willingness to implement four rate-hikes in 2018.

Keep in mind, President Draghi is also slated to participant in a panel at the ECB Forum on Central Banking, which include Bank of Japan (BoJ) Governor Haruhiko Kuroda, Reserve Bank of Australia (RBA) Governor Philip Lowe and Fed Chairman Jerome Powell, and another batch of dovish rhetoric may dampen the appeal of the single currency as the Governing Council pledges to retain the ‘policy of reinvesting the principal payments from maturing securities purchased under the APP for an extended period of time after the end of our net asset purchases, and in any case for as long as necessary to maintain favourable liquidity conditions and an ample degree of monetary accommodation.’

As a result, EUR/USD remains vulnerable to further losses as it appears to be carving a bearish outside-day (engulfing), while the Relative Strength Index (RSI) highlights a similar dynamic as it preserves the downward trend from earlier this year and approaches oversold territory. 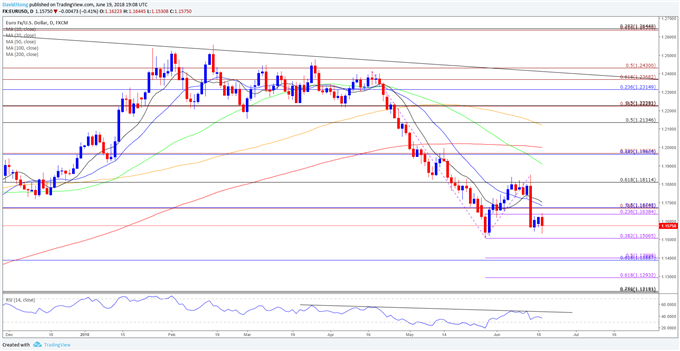