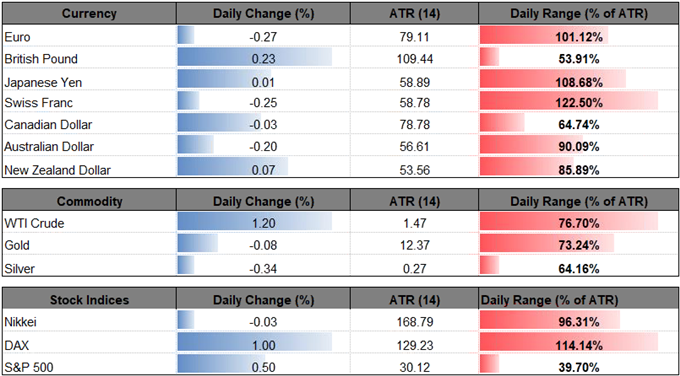 Crude trades above $70/bbl for the first time since 2014, with oil prices at risk of extending the advance from earlier this month as a bullish sequence unfolds. Meanwhile, the U.S. dollar regains its footing following the lackluster Non-Farm Payrolls (NFP) report,

Crude remains bid as U.S. President Donald Trumpthreatens to withdraw from the 2015 Iran nuclear deal, and oil prices may continue to retrace the decline from back in 2014 as they breakout of a near-term range.

Even though U.S. field outputs sit at record-highs, renewed sanctions against Iran may keep oil prices afloat especially as the Organization of the Petroleum Exporting Countries (OPEC) and its allies keep the door open to carry the production-cutting pact into 2019. In turn, officials in Saudi Arabia may largely achieve their target of $80/bbl over the coming months, with increased turmoil in the Middle East likely to fuel the recent rally as both price and the Relative Strength Index (RSI) preserve the bullish trends from earlier this year.

Bear in mind, recent price action warns of extreme market conditions as the RSI approaches 70, and oil prices may exhibit a similar behavior as the start of 2018 should the oscillator push into overbought territory. 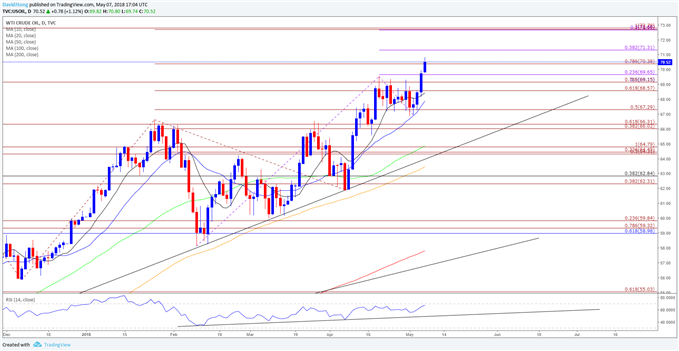 USD/JPY stands at risk of facing range-bound conditions ahead of the key data prints coming out of the U.S. economy as it fails to retain the bearish formation from the previous week.

The dollar-yen rate pares the decline following the lackluster U.S. Non-Farm Payrolls (NFP) report even as Fed Fund Futures continue to highlight limited bets for four rate-hikes in 2018, and fresh comments from Atlanta Fed President Raphael Bostic suggest the central bank is in no rush to extend the hiking cycle as the 2018-voting member on the Federal Open Market Committee (FOMC) is ‘comfortable with some degree of overshooting the 2 percent target.’ 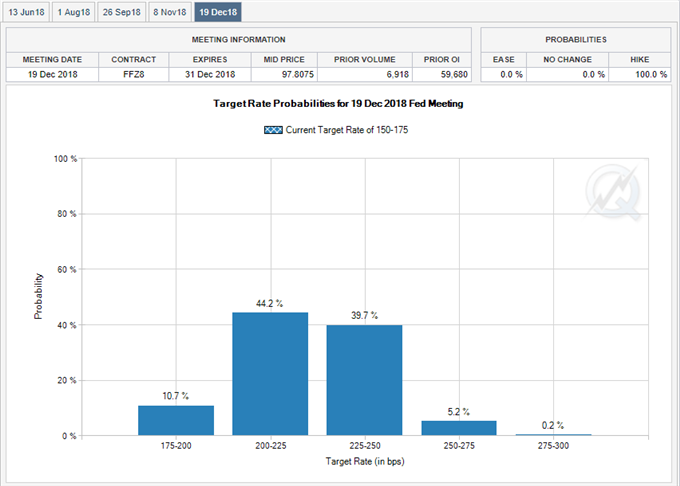 With that said, the FOMC may stay on course to further normalize monetary policy over the coming months, but Chairman Jerome Powell and Co. continue to project a neutral Fed Funds rate of 2.75% to 3.00% at the next quarterly meeting in June as ‘inflation on a 12-month basis is expected to run near the Committee's symmetric 2 percent objective over the medium term.’

In turn, fresh updates to the U.S. Consumer Price Index (CPI) may do little to alter Fed expectations as both the headline and core readings are projected to show a minor uptick in April, and USD/JPY may stage a larger pullback over the coming days as the bullish momentum unravels. 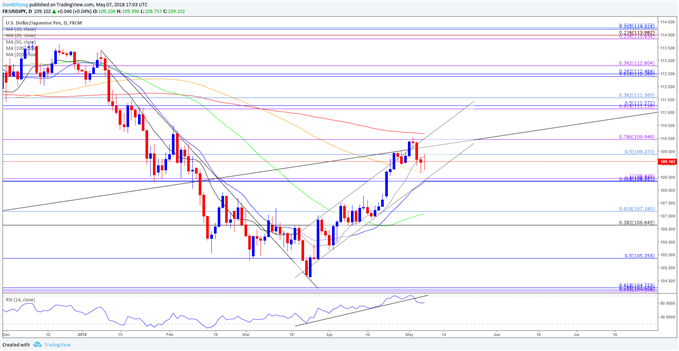