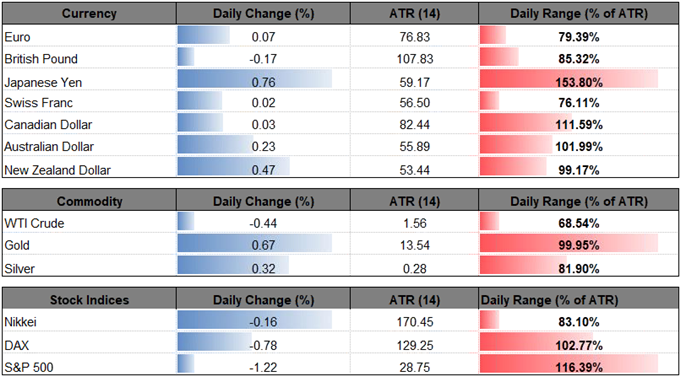 The U.S. dollar struggles to hold its ground following the Federal Open Market Committee (FOMC) interest rate decision as the central bank largely sticks to the current script, with the greenback at risk of giving back the advance from the previous month as market participants scale back bets for four rate-hikes in 2018.

USD/JPY remains under pressure following the Federal Open Market Committee (FOMC) interest rate decision as the ISM Non-Manufacturing survey narrows more-than-expected in April, and the pair stands at risk for further losses as the bullish momentum starts to unravel. 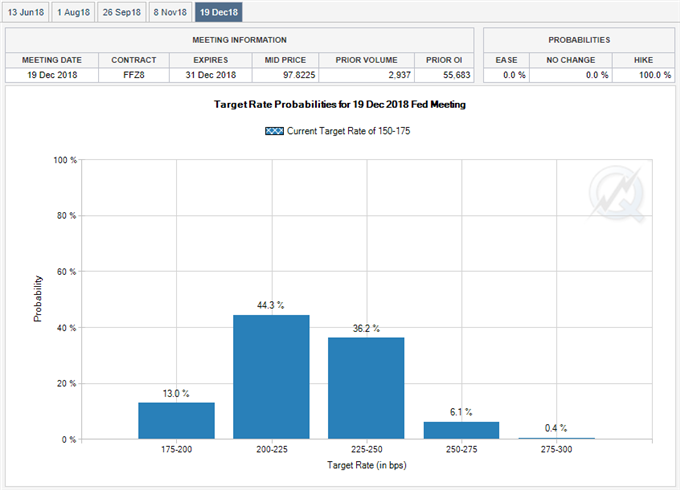 Recent remarks from the FOMC suggest the central bank is in no rush to extend the hiking-cycle as ‘inflation on a 12-month basis is expected to run near the Committee's symmetric 2 percent objective over the medium term,’ and it seems as though Chairman Jerome Powell and Co. will tolerate above-target price growth for the foreseeable future as ‘risks to the economic outlook appear roughly balanced.’ As a result, Fed Fund Futures are starting to show waning expectations for four rate-hikes in 2018, with the benchmark interest rate now anticipated to end the year around the 2.00% to 2.25% threshold.

In turn, market participants may pay increased attention to the U.S. Non-Farm Payrolls (NFP) report as Average Hourly Earnings are projected to hold steady at an annualized 2.7%, and another batch of lackluster data prints may fuel the recent decline in USD/JPY as it dampens the Fed’s scope to extend the hiking-cycle. 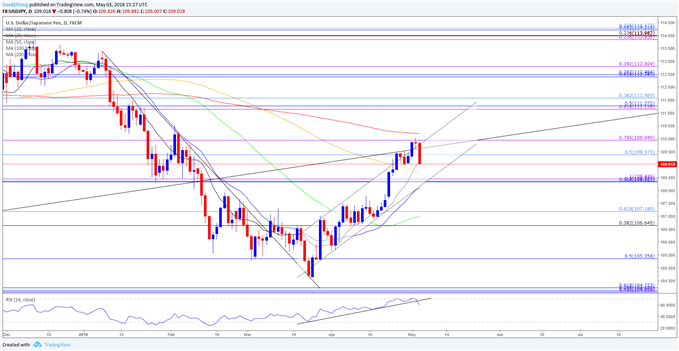 EUR/USD struggles to extend the advance from weekly-low (1.1938) as updates to the Euro-Zone Consumer Price Index (CPI) showed an unexpected slowdown in both the headline and core rate of inflation, with the exchange rate at risk for further losses as the Relative Strength Index (RSI) sits in oversold territory.

The below-forecast reading for inflation may encourage the European Central Bank (ECB) to carry the current policy into the second-half of 2018 as ‘measures of underlying inflation remain subdued and have yet to show convincing signs of a sustained upward trend,’ and the Governing Council may see little scope to alter the forward guidance at the next meeting on June 14 as ‘an ample degree of monetary stimulus remains necessary for underlying inflation pressures to continue to build up and support headline inflation developments over the medium term.’

Keep in mind, President Mario Draghi and Co. appear to be on track to unveil a more detailed exit strategy later this year as the quantitative easing (QE) program is scheduled to expire in September, and a broader shift in EUR/USD behavior may unfold over the coming months as the ECB prepares to switch gears for monetary policy.

Nevertheless, near-term outlook for EUR/USD remains tiled to the downside following the dismal data prints coming out of the euro-area, with the exchange rate at risk for a further decline as long as the RSI holds below 30. 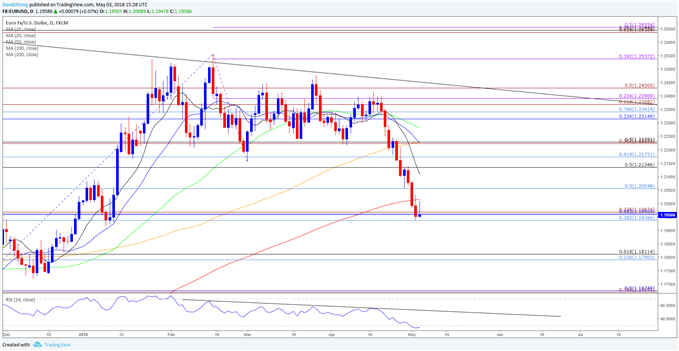