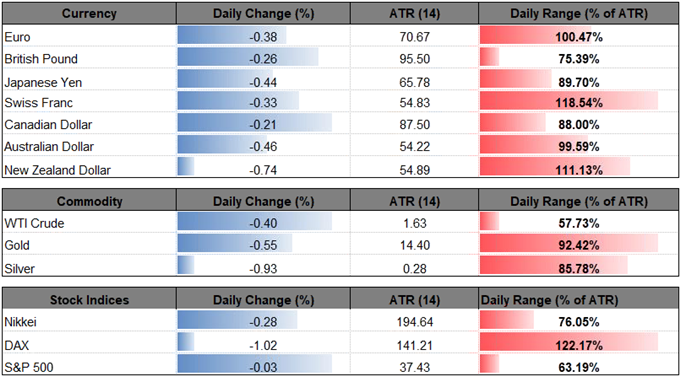 Fresh updates to the U.K. Gross Domestic Product (GDP) report may do little to halt the recent decline in the GBP/USD as the growth rate is expected to expand another annualized 1.4% during the first three-months of 2018, and comments from Bank of England (BoE) Governor Mark Carney may keep pound-dollar under pressure as the central bank head is scheduled to speak at the end of the week.

Signs of tepid growth may dampen the appeal of British Pound as it encourages the BoE to delay the hiking-cycle, and the central bank may merely attempt to buy more time at its next meeting on May 10 as ‘developments regarding the United Kingdom’s withdrawal from the European Union – and in particular the reaction of households, businesses and asset prices to them – remain the most significant influence on, and source of uncertainty about, the economic outlook.’

As a result, Governor Carney may strike a cautious tone even though Monetary Policy Committee (MPC) board member Michael Saunders states that his outlook ‘reflected a preference for an earlier tightening path than implied by the market curve, and the new remarks may ultimately produce headwinds for the British Pound should the central bank head tame bets for an imminent rate-hike. 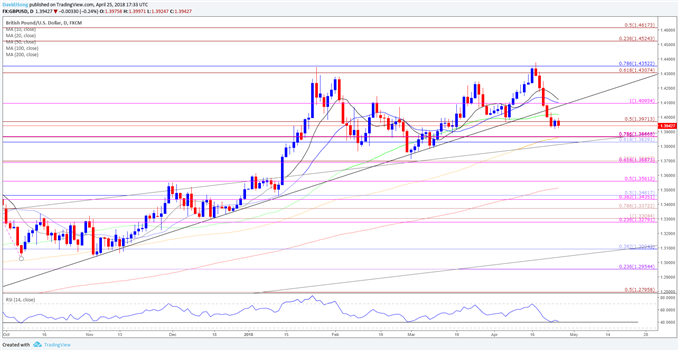 NZD/USD takes out the January-low (0.7073) amid the ongoing pickup in U.S. Treasury Yields, with the pair at risk for a further decline as the bearish momentum appears to be gathering pace.

NZD/USD may continue to exhibit a bearish behavior following the failed attempt to test the 2018-high (0.7437), and the ongoing series of lower highs & lows keeps the near-term outlook tilted to the downside as the advance from the November-low (0.6780) unravels.

Recent developments in the Relative Strength Index (RSI) warns of further losses in NZD/USD as the oscillator flirts with oversold territory, and the exchange rate may trade to fresh yearly lows until the momentum indicator flashes a textbook buy-signal and pushes back above 30. 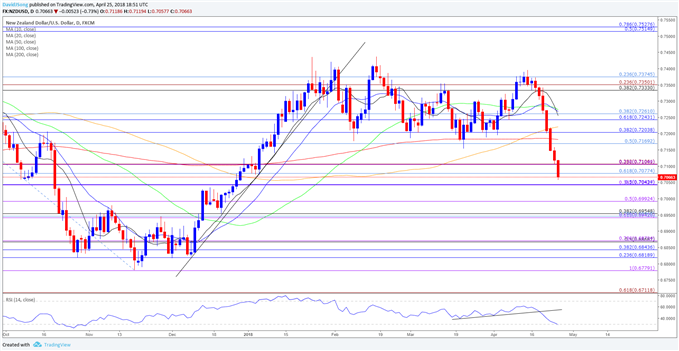