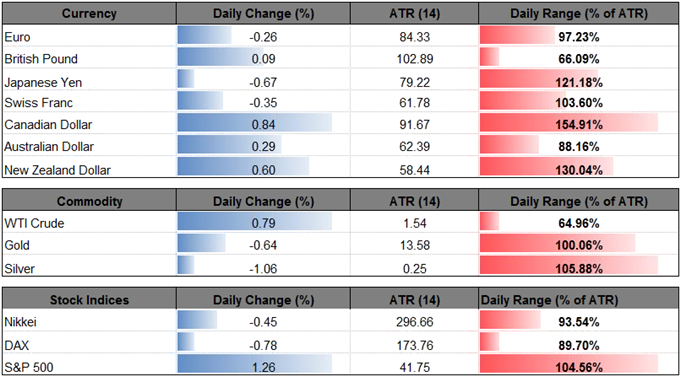 USD/CAD initiates a fresh series of lower highs & lows even as Federal Reserve officials strike a hawkish outlook for monetary policy, and the rebound from the February-low (1.2247) may continue to unravel amid the failed attempts to break/close above the 1.3130 (61.8% retracement) region.

Fresh comments from Fed Governor Lael Brainard suggest the Federal Open Market Committee (FOMC) will continue to implement higher borrowing-costs over the coming months as unemployment ‘could reach levels not seen in several decades,’ and a growing number of central bank officials may project a neutral Fed Funds rate beyond the 2.75% to 3.00% threshold as ‘the recently enacted fiscal stimulus should boost the economy at a time when it is close to full employment and growing above trend.’ Speculation for an extended hiking-cycle may heighten the appeal of the greenback especially as the Bank of Canada (BoC) remains in no rush to further normalize policy, with USD/CAD at risk of exhibiting a more bullish behavior over the coming months as Governor Stephen Poloz and Co. stick to a wait-and-see approach for monetary policy.

However, another 20.0K expansion in Canada Employment may push the BoC to implement a rate-hike sooner rather than later, and the central bank may strike a more upbeat tone at the next meeting on April 18 should the data prints coming out of the Canadian economy highlight an improved outlook for growth and inflation. 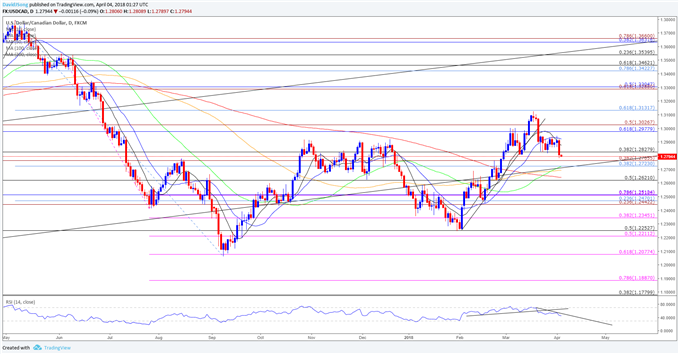 AUD/USD appears to be stuck in a narrow range as the Reserve Bank of Australia (RBA) endorses a wait-and-see approach for monetary policy, and the recent rebound in the exchange rate may continue to unravel as the central bank tames expectations for a rate-hike in 2018.

Even though the ‘central forecast remains for faster growth in 2018,’ the RBA appears to be in no rush to normalize monetary policy as Governor Philip Lowe & Co. reiterate that ‘inflation is likely to remain low for some time, reflecting low growth in labour costs and strong competition in retailing.’ The recent remarks suggest the central bank will stick to the sidelines throughout the first-half of the year as ‘household income has been growing slowly and debt levels are high,’ and the Australian dollar stands at risk of extending the decline from earlier this year as the Federal Reserve appears to be on track to implement higher borrowing-costs over the coming months.

Keep in mind, the monthly opening range remains in focus as AUD/USD hovers above the 2018-low (0.7643), with the pair at risk of facing a larger correction as the bearish momentum appears to be abating. 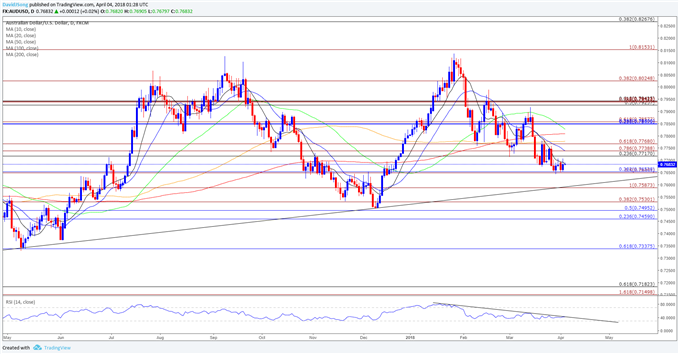 For more in-depth analysis, check out the Q2 Forecast for AUD/USD