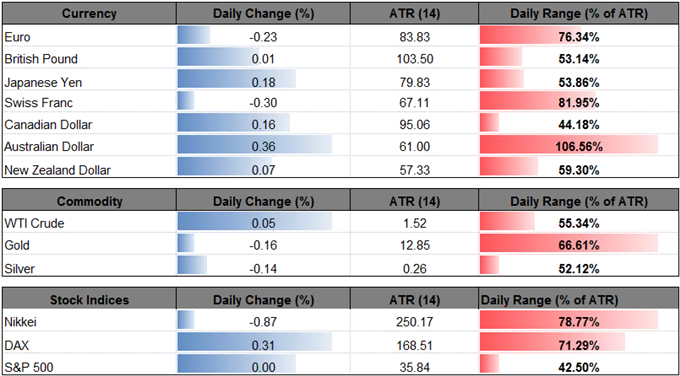 The near-term recovery in the Australian dollar appears to be gathering pace, with AUD/USD on track to test the February-high (0.7989) as it extends the series of higher highs & lows from earlier this week.

Fresh data prints coming out of the global economy has propped up AUD/USD as industrial outputs in China, Australia’s largest trading partner, expands an annualized 7.2% in February, while U.S. Retail Sales unexpectedly contracts 0.1% during the same period. With China targeting a growth rate of 6.5% in 2018, the ongoing expansion in the Asia/Pacific region may put pressure on the Reserve Bank of Australia (RBA) to alter the outlook for monetary policy, but Governor Philip Lowe and Co. seem to be in no rush to implement higher borrowing-costs as ‘household incomes are growing slowly and debt levels are high.’

As a result, the RBA may merely attempt to buy more time at the next meeting on April 3, with AUD/USD at risk of facing range-bound conditions over the near-term should the central bank tame expectations for an imminent rate-hike. Nevertheless, the near-term outlook for AUD/USD remains constructive following the series of failed attempts to close below the 0.7720 (23.6% retracement) to 0.7770 (61.8% expansion) region, with the pair facing a key test over the coming days as it quickly comes up against the topside hurdles. 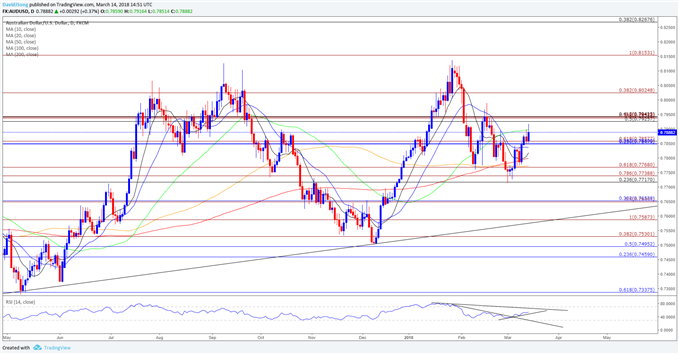 EUR/USD struggles to hold its ground as European Central Bank (ECB) officials endorse a wait-and-see approach for monetary policy, and the pair may continue to consolidate over the coming days should it snaps the bullish sequence from earlier this week.

Fresh remarks from President Mario Draghi suggests the ECB is in no rush to wind down the asset-purchase program as the central bank head pledges ‘monetary policy will remain patient, persistent and prudent,’ and the Governing Council may merely attempt to buy more time at the next meeting on April 26 as ‘the performance of underlying inflation remains subdued compared with previous recoveries.’ Even though the quantitative easing (QE) program is set to expire in September, it seems as though the ECB will retain the current policy throughout the first-half of the year as the central bank still needs ‘to see further evidence that inflation dynamics are moving in the right direction.’

With that said, key developments coming out of the U.S. may largely influence EUR/USD over the near-term especially as the Federal Open Market Committee (FOMC) is widely anticipated to raise the benchmark interest rate to a fresh threshold of 1.50% to 1.75%. Keep in mind, market participants may pay increased attention to the fresh forecasts from Chairman Jerome Powell and Co. as the central bank appears to be on course to further normalize monetary policy over the coming months, but more of the same from the FOMC may fuel the broader shift in EUR/USD behavior as it saps bets for four rate-hikes in 2018.

Nevertheless, the near-term outlook for EUR/USD remains clouded with mixed signals as the Relative Strength Index (RSI) fails to break the bearish formation carried over from the previous month, with the pair at risk of snapping the bullish sequence from earlier this week as it holds the range from earlier this month. 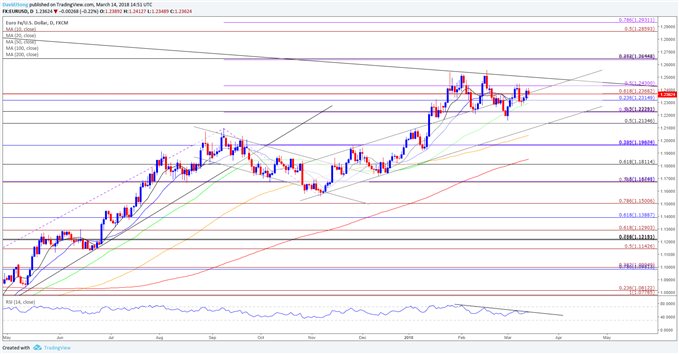