- GBP/USD Succumbs to Threat of ‘Hard Brexit’ After Failing to Breakout of Wedge/Triangle Formation. British Pound at Risk for Further Losses as U.K. Prime Minister Theresa May Appears to Be On Track to Reject European Union (EU) Draft Bill. 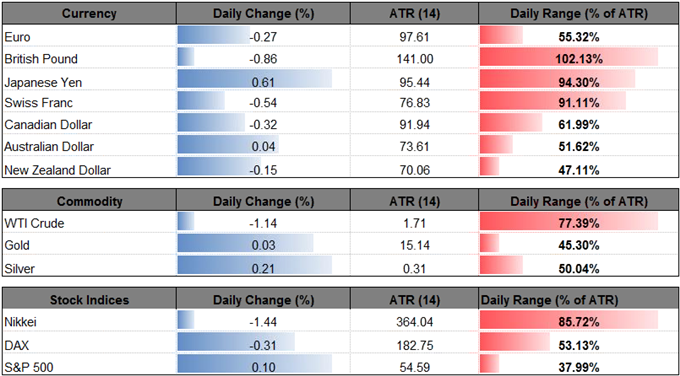 Crude continues to pullback from the monthly-high (64.21), with oil prices at risk for a larger correction as they carve a fresh series of lower highs and lows.

Fresh updates from the U.S. Energy Information Administration (EIA) appear to be weighing on oil prices as crude inventories increased 3.02M barrels in the week ending February 23, while field production climbed to 10.28M b/d during the same period.

Indeed, the push by the Organization of Petroleum Exporting Countries (OPEC) and its allies have helped to generate higher oil prices as group carries the production-cutting agreement into 2018, and the rebalancing efforts should keep crude afloat for now especially as United Arab Emirates Energy Minister Suhail Al Mazrouei notes that the group has outpaced its efforts in reducing supply. However, the ongoing expansion in U.S. production may produce headwinds for crude unless OPEC and its allies implement a more permanent solution to balance the energy market, and recent price action raises the risk for a more meaningful pullback as the rebound from the February-low (58.11) sputters ahead of the 2018-high (66.63). 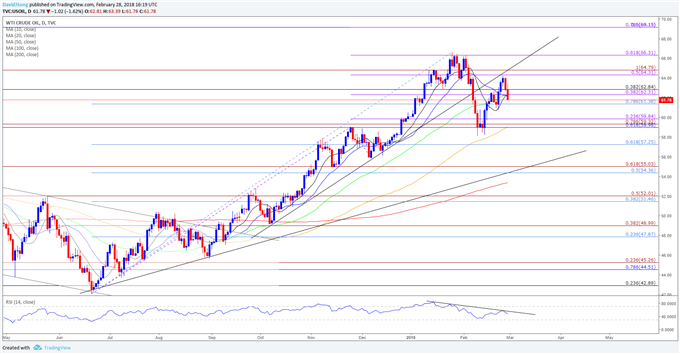 GBP/USD is back under pressure as U.K. Prime Minister Theresa May appears to be on track to reject the European Union’s (EU) Brexit draft bill, and a break of the monthly-low (1.3765) may stoke a larger correction in the pound-dollar exchange rate as both price and the momentum indicator threaten the bullish formations carried over from late last year.

Renewed fears of a ‘hard Brexit’ may present near-term headwinds for the British Pound as it undermines the Bank of England’s (BoE) scope to normalize monetary policy, and the pair may continue to carve a series of lower highs & lows over the coming days as the central bank looks poised to retain the current policy at the next meeting on March 22. Keep in mind, the testimony from Governor Mark Carney suggest the Monetary Policy Committee (MPC) will deliver at least one rate-hike in 2018 as the central bank head pledges to implement higher borrowing-costs over the ‘coming months,’ but the BoE may have little choice but to tame expectations for an imminent rate-hike as the economic outlook for the U.K. remains clouded with high uncertainty.

As a result, GBP/USD may exhibit a more bearish behavior going into March, with the failed attempts to breakout of the wedge/triangle formation bringing the downside targets back on the radar as the advance from late-2017 appears to be unraveling. 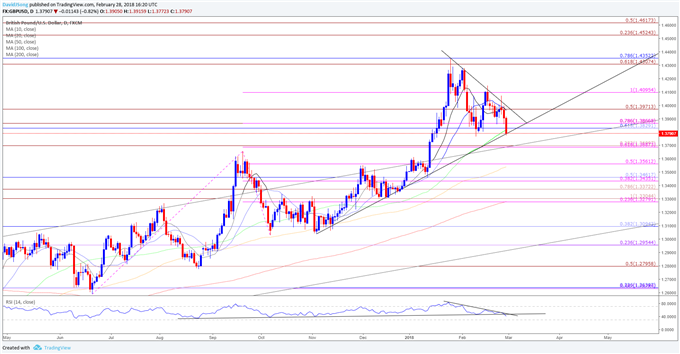 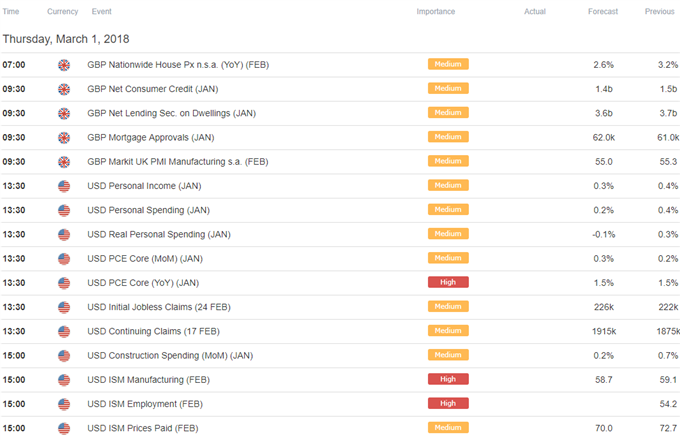