NZD/USD Weakness to Persist as RBNZ Warns of Subdued Inflation

- GBP/USD Breaks Out of Narrow Range as BoE Warns of Faster Hiking-Cycle. 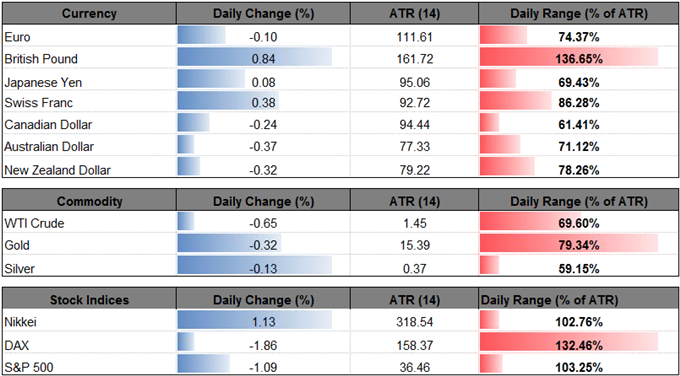 GBP/USD breaks out of the narrow range from earlier this week as the Bank of England (BoE) raises its growth forecast for the U.K., with the pair at risk of staging a more meaningful advance over the days ahead as the central bank adopts a more hawkish outlook for monetary policy.

After voting unanimously to keep the benchmark interest rate at 0.50%, the Monetary Policy Committee (MPC) warns that ‘were the economy to evolve broadly in line with the February Inflation Report projections, monetary policy would need to be tightened somewhat earlier and by a somewhat greater extent over the forecast period than anticipated at the time of the November Report, in order to return inflation sustainably to the target.’

The comments suggest Governor Mark Carney and Co. will stay on course to further normalize monetary policy over the coming months as ‘inflation is projected to fall back gradually over the forecast but remain above the 2% target in the second and third years of the MPC’s central projection,’ and BoE officials may increase their efforts to prepare U.K. households and businesses for higher borrowing-costs as ‘a steady absorption of slack has reduced the degree to which it was appropriate for the MPC to accommodate an extended period of inflation above the target.’

With that said, the reaction to the BoE rate decision brings the topside targets back on the radar for GBP/USD, and the pair may make another attempt to test the 2018-high (1.4346) as it continues to track the upward trend carried over from late last year. 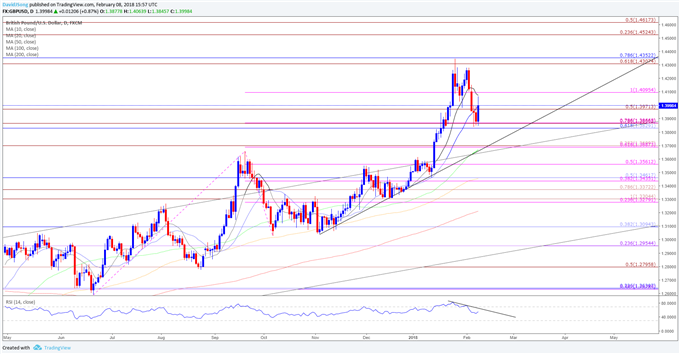 NZD/USD extends the decline from earlier this week as the Reserve Bank of New Zealand (RBNZ) reiterates ‘monetary policy will remain accommodative for a considerable period,’ and the pair stands at risk for further losses as it carves a fresh series of lower highs & lows.

The remarks from acting-Governor Grant Spencer suggests the central bank is in no rush to lift the cash rate off of the record-low as ‘core inflation measures continue to point to subdued underlying inflationary pressure,’ and incoming-Governor Adrian Orr may continue to tame expectations for an imminent rate-hike at the next meeting on March 22 as the ‘central expectation is that capacity pressure will increase, leading to an upwards move in the OCR towards the end of the projection period.’

With that said, the RBNZ’s wait-and-see approach for monetary policy may continue to sap the appeal of the New Zealand dollar, and NZD/USD may continue to give back the advance from the November-low (0.6780) as the Relative Strength Index (RSI) extends the bearish formation carried over from earlier this year. 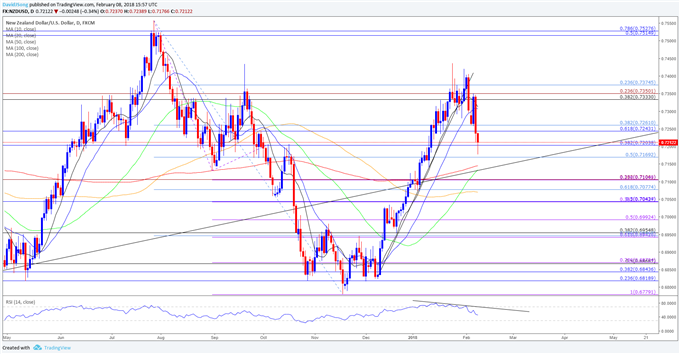