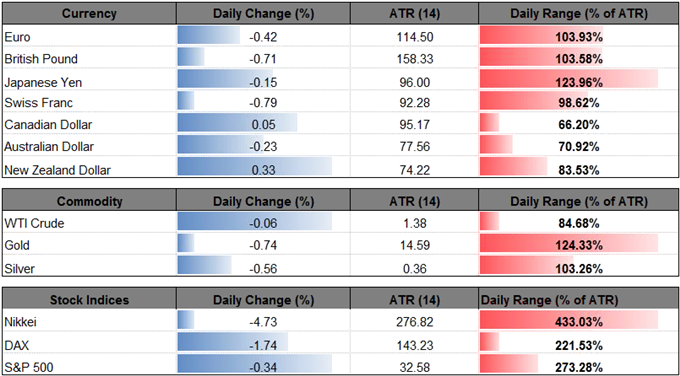 NZD/USD remains under pressure after filling the gap from the start of the week, and fresh updates to New Zealand’s Employment report may fuel the recent series of lower highs & lows in the exchange rate as job/wage growth are projected to slow during the last three-months of 2017.

New Zealand employment is expected to increase an annualized 3.6% following a 4.2% expansion in the third-quarter of 2017, with Private Wages projected to slow to 0.5% from 0.7% during the same period. A set of lackluster data prints are likely to produce a bearish reaction in NZD/USD as it encourages the Reserve Bank of New Zealand (RBNZ) to preserve the record-low cash rate throughout 2018. With Adrian Orr slated to lead the RBNZ in March, acting-Governor Grant Spencer may merely attempt to buy more time at the February 8 rate decision, and more of the same from the central bank may keep the New Zealand dollar under pressure especially as the Federal Open Market Committee (FOMC) appears to be on course to deliver a March rate-hike.

As a result, downside targets are coming back on the radar for NZD/USD as both price and the Relative Strength Index (RSI) snap the bullish formations carried over from late last year, with recent price action raising the risk for a further decline in the exchange rate as the pair starts to carve a fresh series of lower highs & lows. 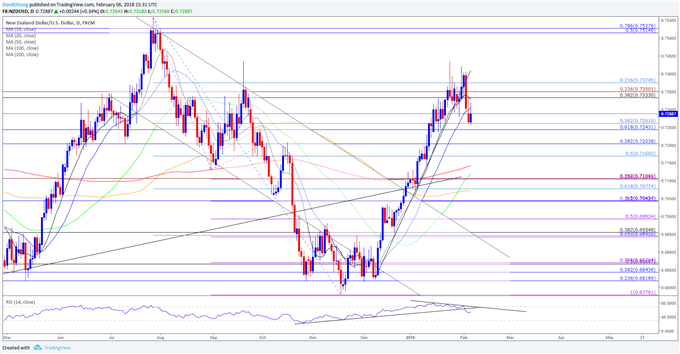 AUD/USD extends the decline from earlier this week as the Reserve Bank of Australia (RBA) keeps the cash rate at the record-low, and the rebound from the December-low (0.7501) may continue to unravel as the central bank endorses a wait-and-see approach for monetary policy.

It seems as though the RBA is in no rush to implement higher borrowing-costs as ‘household incomes are growing slowly and debt levels are high.,’ and Governor Philip Lowe & Co. may continue to tame bets for an imminent rate-hike as ‘inflation is likely to remain low for some time, reflecting low growth in labour costs and strong competition in retailing.’ With that said, the RBA’s quarterly Statement on Monetary Policy on tap for February 9 may produce additional headwinds for the Australian dollar should the central bank show a greater willingness to retain the accommodative stance throughout 2018.

Like, NZD/USD, recent price action keeps the near-term outlook tilted to the downside as AUD/USD highlights a similar dynamic, with both price and the Relative Strength Index (RSI) snapping the bullish formations carried over from late-2017. 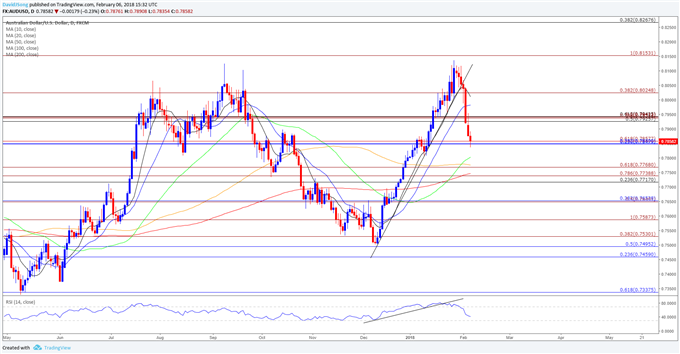