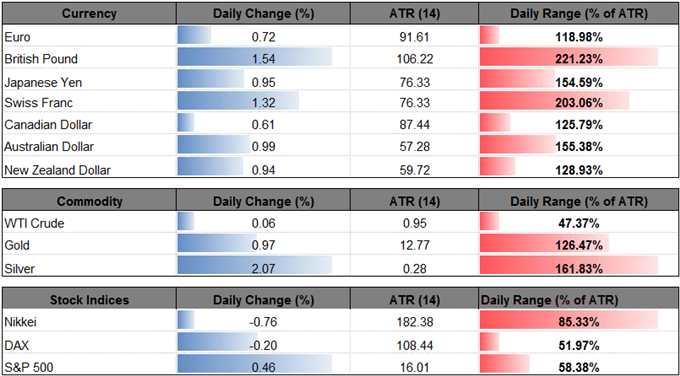 GBP/USD extends the advance from earlier this month as fresh data prints coming out of the U.K. economy highlight an improved outlook for growth and inflation, and recent price action keeps the near-term outlook tilted to the topside especially as the Relative Strength Index (RSI) pushes deeper into overbought territory.

The British Pound remains bid as the U.K. unexpectedly added 102K jobs during the three-months through November, with Average Hourly Earnings excluding Bonuses climbing to an annualized 2.4% from 2.3% in October. The ongoing improvement in the labor market may encourage the Bank of England (BoE) to adopt a more hawkish tone at its first 2018 meeting on February 8, and Governor Mark Carney and Co. may continue to prepare U.K. households and businesses for higher borrowing-costs as ‘the steady erosion of slack over the past year or so had reduced the degree to which it was appropriate for the MPC to accommodate an extended period of inflation above the target.’

Keep in mind, the advance U.K. Gross Domestic Product (GDP) report on tap for later this week is anticipated to show the growth rate slowing to an annualized 1.4% from 1.7% in the third-quarter of 2017, and signs of greater-than-expected slack may rattle the near-term rally in GBP/USD as it dampens bets for a BoE rate-hike. At the same time, another batch of positive developments may spark a bullish reaction in Sterling, with GBP/USD at risk of staging a larger advance as long as the RSI holds above 70. Want to know what other currency pairs the DailyFX team is watching? Download and review the Top Trading Opportunities for 2018. 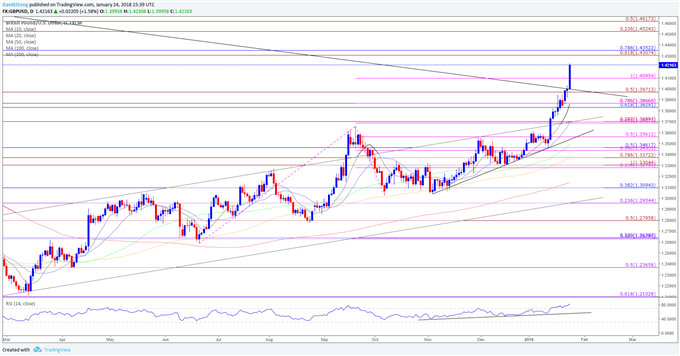 USD/JPY snaps the range from earlier this month as U.S. Treasury Secretary Steven Mnuchin argues ‘a weaker dollar is good for us as it relates to trade and opportunities,’ and the pair appears to be on course to test the 2017-low (107.32) as the bearish momentum gathers pace.

The Trump administration’s recent push to weaken the greenback should keep USD/JPY under pressure, with the dollar at risk of facing additional headwinds as fresh data prints coming out of the world’s largest economy dampen the outlook for growth and inflation.

The 3.6% decline in U.S. Existing Home Sales limits the scope for an above-forecast U.S. Gross Domestic Product (GDP) report, with current forecasts projecting a slowdown in the growth rate to 3.0% per annum from 3.2% in the third-quarter. Another batch of lackluster data prints may fuel the recent selloff in USD/JPY as it undermines the Federal Reserve’s ability to deliver three rate-hikes in 2018, with the pair at risk of exhibiting a more bearish behavior ahead of the January 31 interest rate decision as the Relative Strength Index (RSI) slips back into oversold territory. 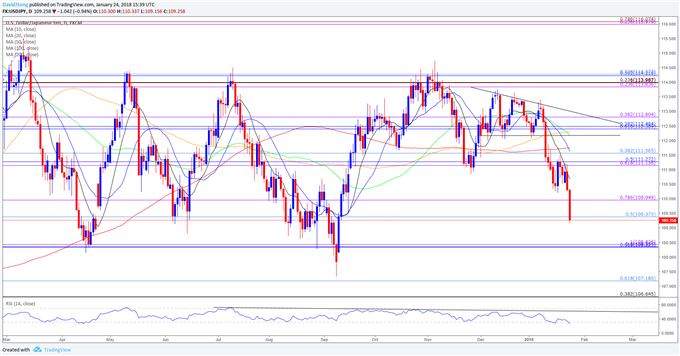