- USD/JPY Bearish Sequence in Focus Ahead of BoJ Meeting. 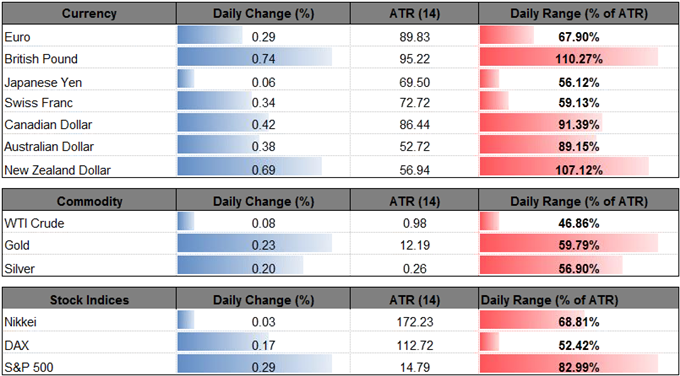 Fresh developments coming out of the U.K. may rattle the near-term rally in GBP/USD should the data prints dampen the threat for above-target inflation.

U.K. Average Weekly Earnings are projected to hold steady at an annualized 2.5% in November as Employment is expected to narrow another 12K during the same period, and the British Pound may face headwinds ahead of the advanced Gross Domestic Product (GDP) report due out later this week as the growth rate is anticipated to slow to 1.4% per annum from 1.7% in the third-quarter of 2017.

A slew of dismal developments may not only yield a bearish reaction but may also lead to a near-term correction in GBP/USD as it dampens bets for an imminent Bank of England (BoE) rate-hike.

Its sees as though Governor Mark Carney and Co. will continue to normalize monetary policy in 2018 as ‘the steady erosion of slack over the past year or so had reduced the degree to which it was appropriate for the MPC to accommodate an extended period of inflation above the target,’ but signs of easing price pressures may encourage the committee to adopt a less-hawkish outlook for monetary policy as ‘inflation was likely to be close to its peak, and would decline towards the 2% target in the medium term.’

Nevertheless, the near-term outlook for GBP/USD remains constructive as the pair breaks out of a wedge formation, with the pair at risk for a squeeze higher as long as the Relative Strength Index (RSI) holds in overbought territory for the first time since September. Want to know what other currency pairs the DailyFX team is watching? Download and review the Top Trading Opportunities for 2018. 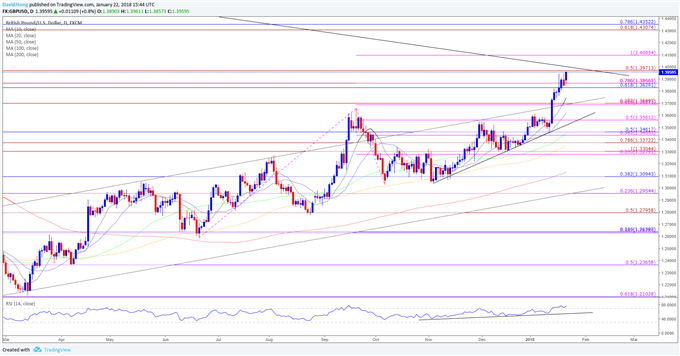 USD/JPY fills the gap from the weekly open, but recent price action keeps the near-term outlook tilted to the downside as the pair extends the string of lower-highs from the previous week.

Market participants may largely ignore the Bank of Japan (BoJ) meeting as Governor Haruhiko Kuroda and Co. stick to the negative interest rate policy (NIRP), and the U.S. government shutdown may grab increased attention the threat for a prolonged standoff dampens the outlook for growth and inflation.

As a result, USD/JPY may exhibit a more bearish behavior ahead of the Federal Open Market Committee (FOMC) interest rate decision on January 31 as the central bank is already expected to keep the benchmark interest rate on hold, and the break of the descending triangle may cultivate a more meaningful depreciation in the dollar-yen exchange rate especially as the Relative Strength Index (RSI) extends the bearish formation carried over from the summer months.

Keep in mind, the FOMC appears to be on course to implement higher borrowing-costs over the coming months as ‘many participants expected the proposed cuts in personal taxes to provide some boost to consumer spending,’ but the central bank appears reluctant to follow a more aggressive hiking-cycle especially as ‘some participants observed that there was a possibility that inflation might stay below the objective for longer than they currently expected.’ 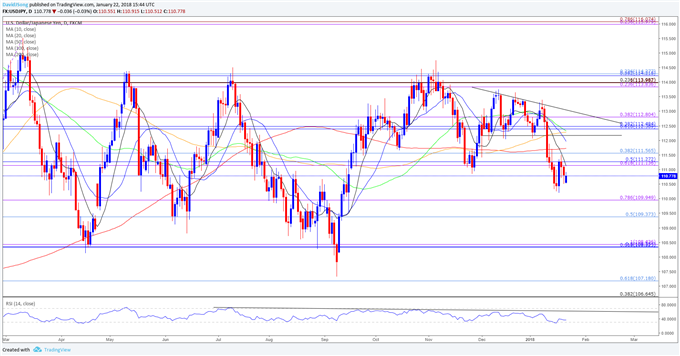