The ISM Manufacturing survey is expected to hold steady in December after narrowing for the past two months, but another batch of lackluster data prints may ultimately fuel the near-term rally in EUR/USD as it dampens bets for higher interest rates.

The Federal Open Market Committee (FOMC) appears to be on course to deliver three rate-hikes in 2018 as officials continue to project a terminal rate between 2.75% to 3.00%, and the December meeting minutes may largely reiterate that ‘economic conditions will evolve in a manner that will warrant gradual increases in the federal funds rate’ as the economy approaches full-employment. However, signs of greater-than-expected slack may prompt the FOMC under Jerome Powell to adopt a less hawkish tone, with the central bank at risk of concluding its hiking-cycle ahead of schedule as inflation continues to run below the 2% target.

As a result, market participants may continue to tame expectations for an imminent Fed rate-hike, with the dollar at risk of exhibiting a more bearish behavior over the near-term amid concerns of an inverting U.S. yield curve. Want to following along with key discussions on current market themes and potential trade setups? Sign Up & Join DailyFX Currency Analyst David Song LIVE.

The U.S. ISM Manufacturing survey narrowed for the second consecutive month in November, with the index slipping to 58.2 from 58.7 the month prior. A deeper look at the report showed the gauge for factory-gate prices falling to 65.5 from 68.5 in October, with the Employment component edging down to 59.7 from 59.8, while the Production index climbed to 63.9 from 61.0 during the same period.

The batch of mixed data prints sparked a limited reaction in EUR/USD, with the exchange rate coming off the lows to end the day at 1.1895. For additional resources, download and review the FREE DailyFX Advanced Guide for Trading the News to learn our 8 step strategy. 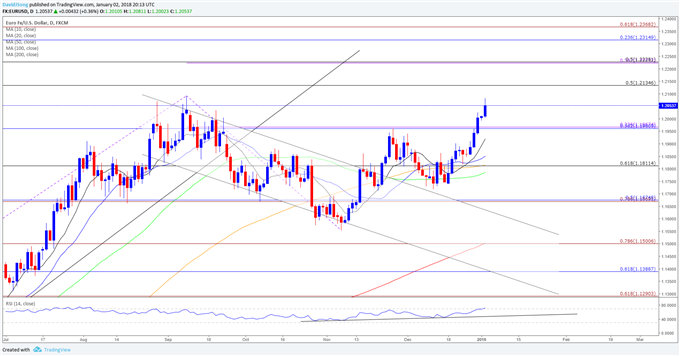