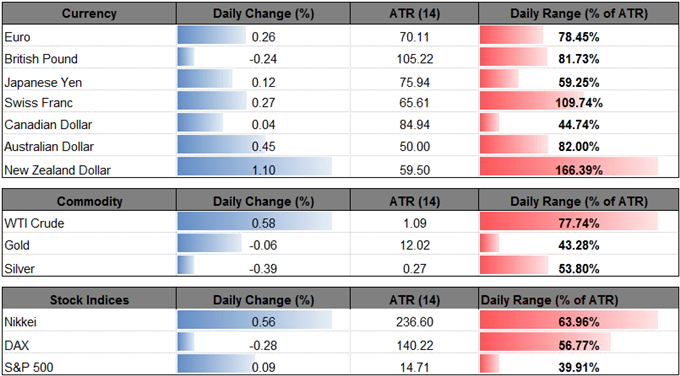 NZD/USD breaks out of the monthly opening range as the coalition government under Prime Minister Jacinda Ardern appoints Adrian Orr, the chief executive of the New Zealand Superannuation Fund, to lead the Reserve Bank of New Zealand (RBNZ) starting in March 2018.

The upcoming transition appears to have heightened the appeal of the New Zealand dollar as Mr. Orr, who also served as Deputy Governor and Head of Financial Stability at the RBNZ from 2003 to 2007, is expected to take a less-dovish approach in managing monetary policy.

In turn, NZD/USD may stage a more meaningful rebound going into the end of the year, but keep in mind, the push to review and revise the RBNZ’s mandate is likely to produce headwinds for the New Zealand dollar, with acting Governor Spencer Grant largely anticipate to preserve the record-low cash rate at the next interest rate decision on February 8.

With that said, NZD/USD may continue to threaten the near-term range ahead of the Federal Open Market Committee (FOMC) interest rate decision on December 13, but the broader outlook remains tilted to the downside as both price and the Relative Strength Index (RSI) preserve the bearish formations carried over from the summer months. Varying market conditions require alternative strategies as trends change. Want a better understanding of the different approaches for trading? Download and review the FREE DailyFX Advance Trading Guide! 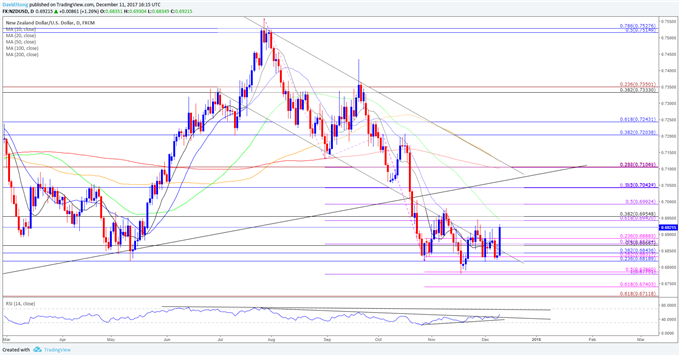 The U.K. Consumer Price Index (CPI) may fuel the near-term weakness in GBP/USD as both the headline and core reading for inflation are expected to hold steady in November.

A 2.7% reading for the core CPI may spark a bearish reaction in the British Pound especially as the Bank of England (BoE) warns ‘inflation is expected to fall back over the next year.’ As a result, the central bank may merely attempt to buy more time at its last 2017 meeting on December 14, but Governor Mark Carney and Co. may continue to prepare U.K. households and businesses for higher borrowing-costs as the ‘most recent assessment of the outlook for inflation and activity, contained in the November Inflation Report, was conditioned on a market path that implied two additional 25 basis point increases in Bank Rate over the three-year forecast period.’

With that said, GBP/USD may exhibit a more bearish behavior over the coming days as it starts to carve a series of lower highs & lows, but the broader outlook remains constructive as the pair continues to track the upward trending channel from earlier this year. Interested in watching the market reaction to the BoE meeting? Sign up and join DailyFX Market Analyst Martin Essex LIVE to cover the last interest rate decision for 2017. 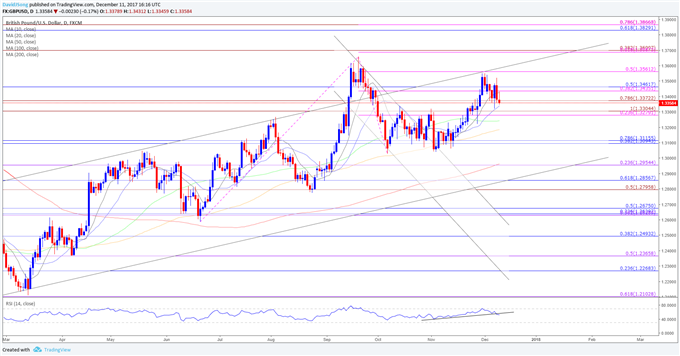