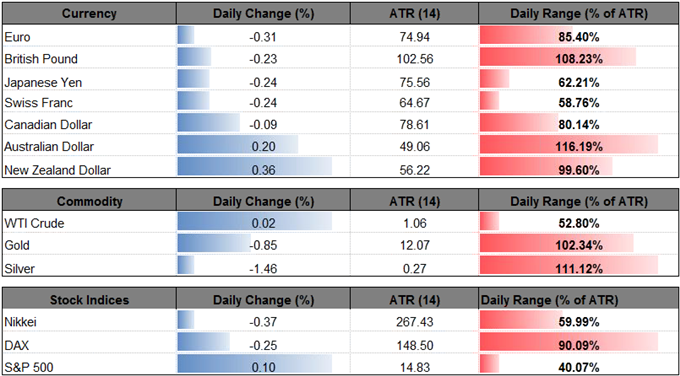 AUD/USD climbs to a fresh weekly-high (0.7654) following the 0.5% rise in Australia Retail Sales, and the pair may stage a larger advance over the remainder of the week as the 3Q Gross Domestic Product (GDP) report is anticipated to show the economy expanding an annualized 3.0%.

The above-forecast reading for retail spending accompanied by a pickup in the growth rate may heighten the appeal of the Australian dollar as raises the outlook for inflation, and the Reserve Bank of Australia (RBA) may come under pressure to remove the record-low cash rate as ‘the central forecast is for GDP growth to average around 3 per cent over the next few years.’ As a result, Governor Philip Lowe and Co. may gradually change their tune in 2018 as the central bank head notes ‘it is more likely that the next move in interest rates will be up, rather than down,’ but a batch of mixed GDP figures may keep the RBA on the sidelines for the foreseeable future as ‘household incomes are growing slowly and debt levels are high.’

Keep in mind, the broader outlook for AUD/USD remains tilted to the downside as the pair remains confined by the descending channel carried over from September, but the pair may stage a more meaningful rebound off of channel support as the Relative Strength Index (RSI) deviates with price and appears to be breaking out of the bearish formation from the summer months. 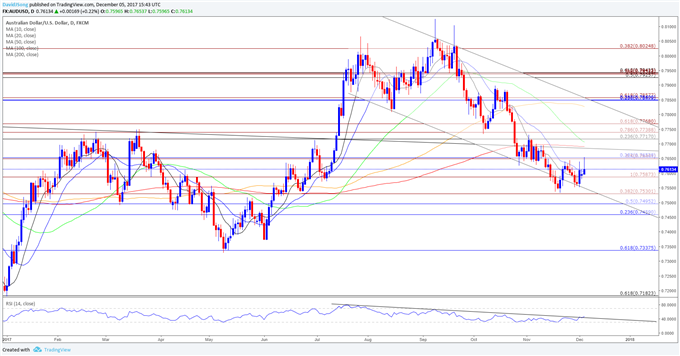 The near-term advance in GBP/USD unravels as U.K. Prime Minster Theresa May fails to push the Brexit bill into the next phase, and the pair may exhibit a more bearish behavior throughout the first full week of December as it initiates a fresh series of lower highs & lows.

The recent string of failed attempts to test the 2017-high (1.3657) raises the risk for a further decline in GBP/USD, with the British Pound at risk of facing additional headwinds ahead of the Bank of England’s (BoE) last 2017 interest rate decision on December 14 as the both U.K. Industrial Production and Manufacturing are expected to hold flat in October. In turn, the BoE may tame expectations for an imminent rate-hike as the central bank is widely expected to carry the current policy into 2018, but Governor Mark Carney and Co. may gradually change their tune over the coming months as the central bank starts to normalize monetary policy.

With that said, the downside targets are coming back on the radar for GBP/USD especially as the Relative Strength Index (RSI) fails to push into overbought territory, with both price and the momentum indicator at risk of threatening the bullish formations from earlier this year as U.K. officials struggle to strike a deal with the European Union (EU). 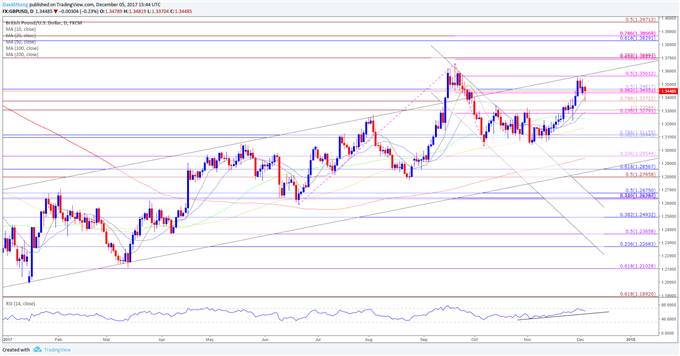