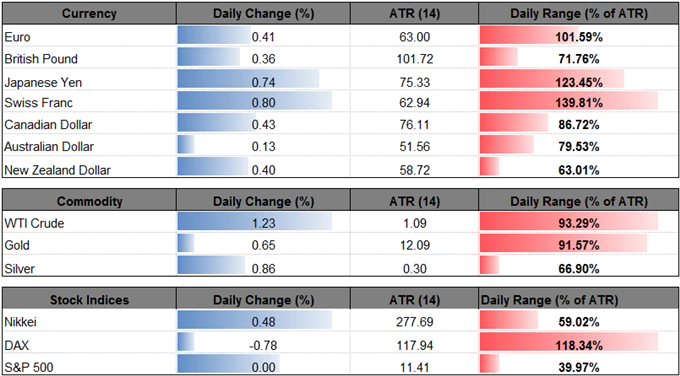 The 1.2% decline in demand for large-ticket items may keep the dollar under pressure as it curbs the outlook for growth and inflation, and the Federal Open Market Committee (FOMC) Minutes may offer little to no relief should the central bank relay a more cautious tone ahead of its last meeting for 2017.

With the FOMC on course to raise the benchmark interest rate in December, the committee is likely to reiterate that ‘that economic conditions would evolve in a manner that would warrant gradual increases in the federal funds rate,’ but lackluster data prints coming out of the economy may encourage a growing number of Fed officials to adopt a dovish outlook as ‘several expressed concern that the persistence of low rates of inflation might imply that the underlying trend was running below 2 percent, risking a decline in inflation expectations.’

Keep in mind, the upcoming major U.S. holiday may produce choppy price action in USD/JPY especially as market participation tend to thin ahead of the weekend, but speculation for a dovish Fed rate-hike may fuel the bearish sequence in USD/JPY especially as both price and the Relative Strength Index (RSI) continue to track the downward trends from earlier this year. 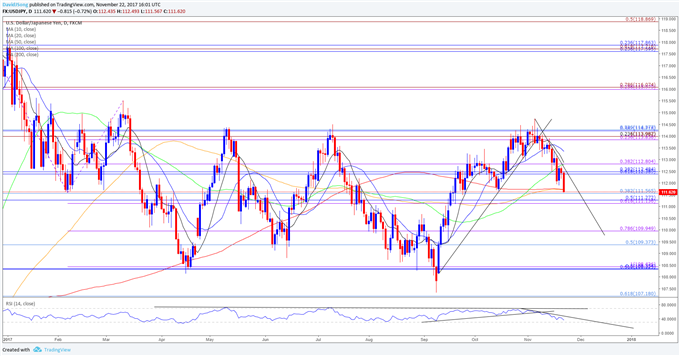 EUR/USD pares the decline from earlier this week even as German Chancellor Angela Merkel fails to form a coalition government, and the exchange rate appears to be on its way to test the monthly-high (1.1861) as the pair threatens the downward trending channel carried over from September.

Signs of a near-term shift in EUR/USD behavior are starting to surface as the Relative Strength Index (RSI) also appears to be breaking out of a bearish formation, but the European Central Bank’s (ECB) account of October monetary policy meeting may generate headwinds for the single-currency as the Governing Council carries the quantitative easing (QE) program into 2018. Recent comments from President Mario Draghi suggest the central will keep the door open to further support the monetary union as the asset-purchases are scheduled to run ‘ until end of September 2018, or beyond, if necessary,’ and a batch of dovish comments may rattle the recent rebound in EUR/USD as the central bank appears to be in no rush to normalize monetary policy.

However, a growing dissent within the ECB may ultimately prop up the single-currency as 'a stronger euro area economy and the dissipation of deflationary risks underpinned increased confidence that the Governing Council’s inflation aim would be achieved over the medium term,’ and the central bank may gradually change its tune over the coming months as President Draghi & Co. start to wind down the easing-cycle. 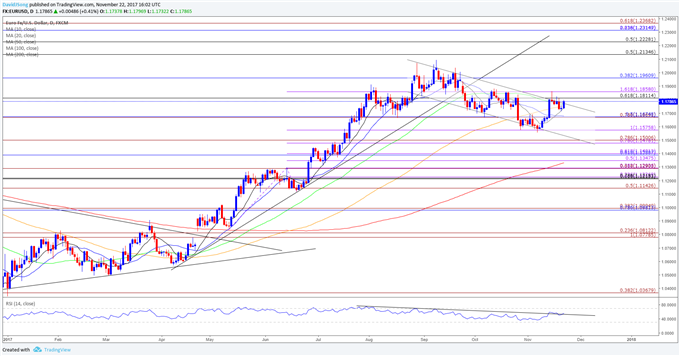