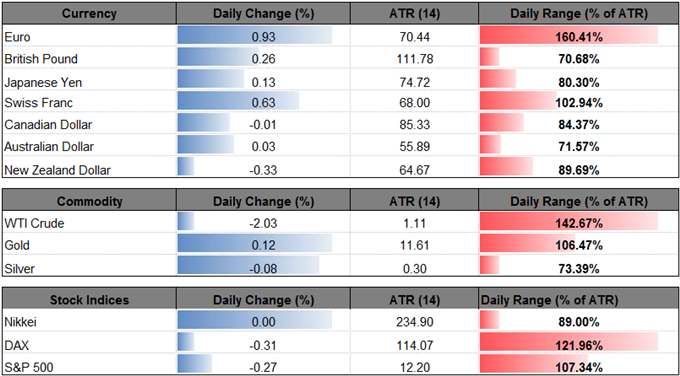 USD/JPY falls back from a fresh weekly-high (113.91) as Federal Reserve officials signal a more shallow path for the benchmark interest rate, and the pair may remain under pressure over the next 24-hours of trade as the U.S. Consumer Price Index (CPI) is expected to slow to an annualized 2.0%, while Retail Sales are projected to hold flat in October.

Even though Chair Janet Yellen cautioned central bank officials from ‘talking about having made up their minds about policy communication, about policy for a forthcoming meeting,’ St. Louis Fed President James Bullard warned of a more adverse scenario where the Federal Open Market Committee (FOMC) continues ‘to raise rates and inflation stays where it is or continues to go down further away from our target and inflation expectations fall.’ As a result, mixed data prints coming out of U.S. economy may encourage a growing number of Fed officials to trim the longer-run forecast for the benchmark interest rate, but the FOMC may stay on course to deliver a December rate-hike as ‘the Committee expects that economic conditions will evolve in a manner that will warrant gradual increases in the federal funds rate.’

With that said, USD/JPY may continue to consolidate ahead of the FOMC rate decision on December 13, with the pair at risk of giving back the advance from the 2017-low (107.32) as both price and the Relative Strength Index (RSI) snap the bullish formations from September. 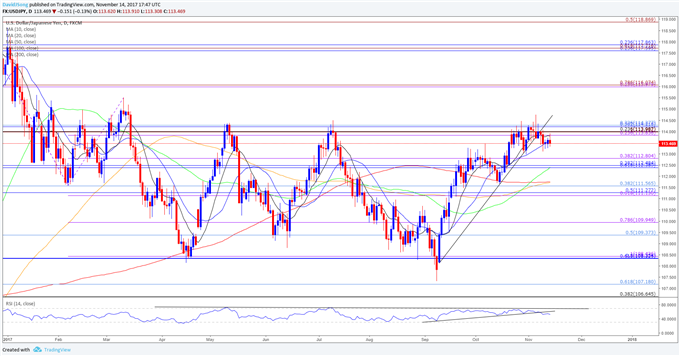 GBP/USD struggles to preserve the advance from earlier this month as the below-forecast print for the U.K. Consumer Price Index (CPI) rattles expectations for higher borrowing-costs, and the British Pound may exhibit a more bearish behavior ahead of the next Bank of England (BoE) interest rate decision on December 14 as the central bank ‘still expects inflation to peak above 3.0% in October.’

With the headline and the core CPI unexpectedly holding steady in October, a downtick in U.K. Average Weekly Earnings may ultimately produce a bearish reaction in the pound-dollar exchange rate as Governor Mark Carney & Co. appear to be in no rush to further normalize monetary policy. The dovish rate-hike in November suggests the Monetary Policy Committee (MPC) will endorse a wait-and-see approach ahead of 2018 as ‘inflation is expected to fall back over the next year,’ but a growing number of BoE officials may prepare U.K. households and businesses for higher borrowing-costs as ‘a majority of MPC members had judged that, if the economy continued to follow a path broadly consistent with the prospect of a continued erosion of slack and a gradual rise in underlying inflationary pressure, some withdrawal of monetary stimulus was likely to be appropriate over the coming months in order to return inflation sustainably to target.’

With that said, another batch of disappointing U.K. data prints may keep GBP/USD under pressure, but the broader outlook remains constructive as the BoE changes the course for monetary policy for the first time in over a decade. 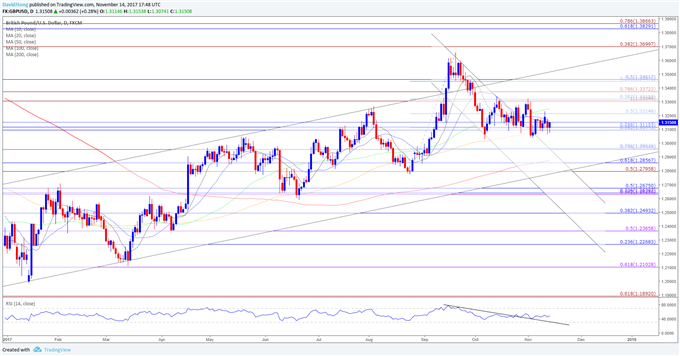 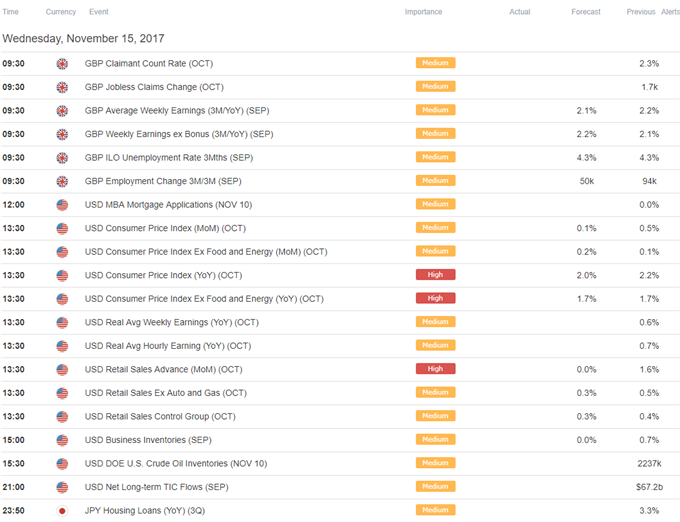