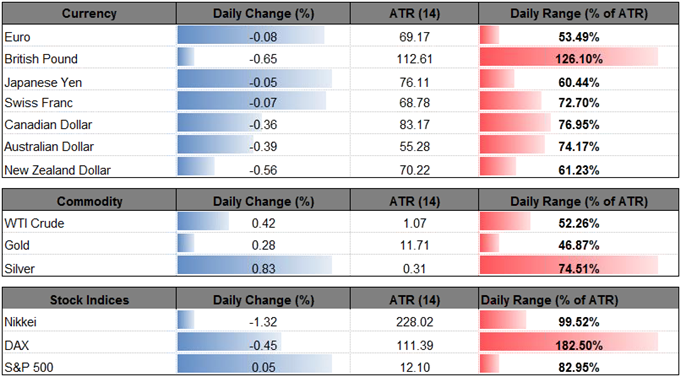 EUR/USD extends the series of higher-lows from the previous week, with the pair coming up against the monthly-high (1.1690), but fresh comments from European Central Bank (ECB) officials may tame the near-term rebound in the single-currency as the Governing Council remains in no rush to move away from its easing-cycle.

With the euro-area preliminary Gross Domestic Product (GDP) report anticipated to confirm the 2.5% expansion in the growth rate, market participants are likely to pay close attention to the ECB’s first conference on central bank communications from November 14 to 15 as President Mario Draghi along with a batch of Governing Council officials are scheduled to speak over the coming days. With the ECB on course to carry the quantitative easing (QE) program into 2018, central bank officials may largely defend their decision to extend the non-standard measure as ‘an ample degree of monetary stimulus remains necessary for underlying inflation pressures to continue to build up and support headline inflation developments over the medium term.’

However, an unexpected upward revision in the Euro-Zone growth rate may prop up the single-currency as ‘the strong cyclical momentum, as evidenced in recent developments in sentiment indicators, could lead to further positive growth surprises,’ and a positive development may spur a rift within the Governing Council as ‘risks surrounding the euro area growth outlook remain broadly balanced.’ 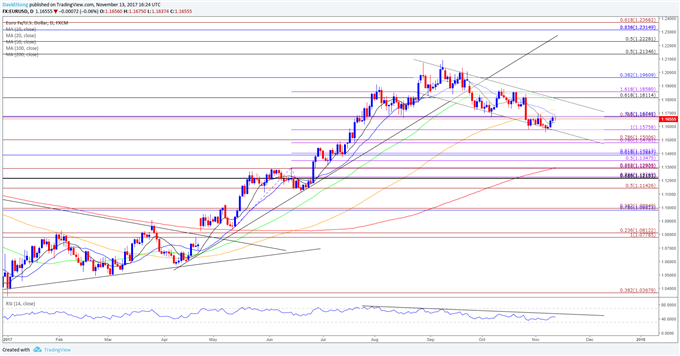 A pickup in the U.K. Consumer Price Index (CPI) may impact the near-term outlook for GBP/USD as Bank of England (BoE) Governor Mark Carney would be forced to write a letter to U.K. Chancellor of Exchequer Philip Hammond ‘if inflation moves away from the target by more than 1 percentage point in either direction.’

With the headline reading for U.K. CPI anticipated to increase an annualized 3.1% from 3.0% in September, ‘the Governor is required to send an open letter to the Chancellor explaining why inflation has moved away from target and what action the Bank is taking to bring inflation back to target.’ Market participants will likely hunt for clues following the 7 to 2 split to remove the record-low interest rate, but Governor Carney may merely reiterate that the Monetary Policy Committee (MPC) ‘will respond to developments as they occur insofar as they affect the behaviour of households and businesses, and the outlook for inflation.’

In turn, more of the same from the central bank head may generate a fresh series of lower highs & lows in GBP/USD, but a growing number of BoE officials may prepare U.K. households and businesses for higher borrowing-costs as Chief Economist Andrew Haldane argues ‘price rises across the whole economy are currently running well above the 2 percent inflation target and are expected to remain above-target for the next few years.’ With the 25bp rate-hike ‘unlikely to have a significant impact’ on the U.K. economy, the MPC may start to lay out a more detailed hiking-cycle over the coming months, with GBP/USD at risk of extending the advance from earlier this year even as the economic outlook remains clouded by Brexit. 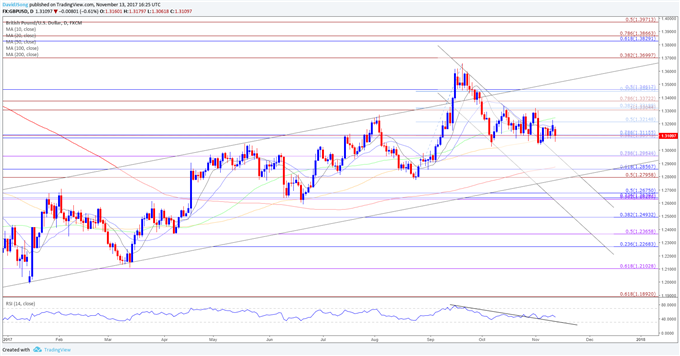 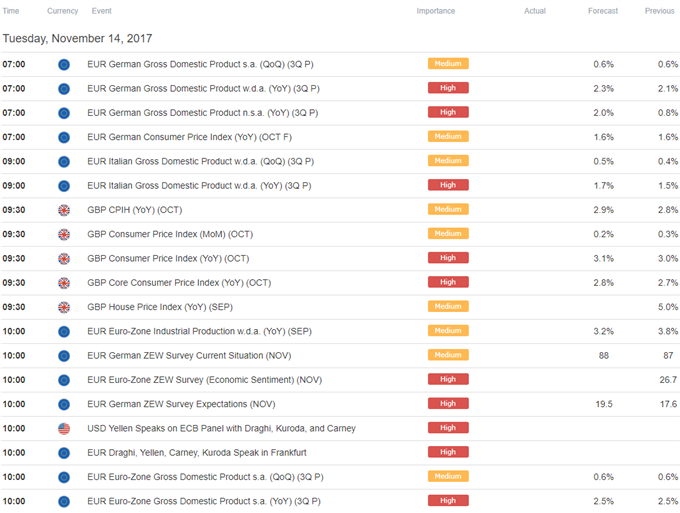