GBP/USD Resilience to Persist Ahead of U.K. CPI, Slew of BoE Rhetoric

- GBP/USD Resilience to Persist Ahead of U.K. CPI, Slew of BoE Rhetoric. 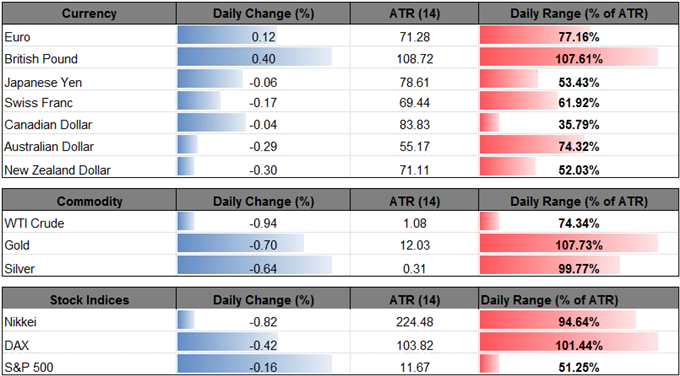 GBP/USD appears to be on its way to test the November-high (1.3321) as it breaks out of the narrow range from earlier this week, and the key developments coming out of the U.K. economy may continue to fuel the near-term resilience in the British Pound should the data prints encourage the Bank of England (BoE) to further normalize monetary policy in 2018.

With the U.K. Consumer Price Index (CPI) anticipated to increase to an annualized 3.1% from 3.0% in October, heightening price pressures may spark a hawkish response from the central bank as Governor Mark Carney and Co. are scheduled to speak over the coming days. Even though the Monetary Policy Committee (MPC) looks poised to retain the current policy at the last 2017-meeting on December 14, the BoE may have little choice but to implement higher borrowing-costs next year as ‘a majority of MPC members had judged that, if the economy continued to follow a path broadly consistent with the prospect of a continued erosion of slack and a gradual rise in underlying inflationary pressure, some withdrawal of monetary stimulus was likely to be appropriate over the coming months in order to return inflation sustainably to target.’

However, the Jobless Claims report is expected to show Average Weekly Earnings narrowing to 2.1% per annum from 2.2% in August, and signs of subdued wage growth may push the BoE to endorse a wait-and-see approach ahead of 2018 as ‘inflation was expected to fall back over the next year and, conditioned on the gently rising path of Bank Rate implied by current market yields, to approach the 2% target by the end of the forecast period.’ As a result, the British Pound stands at risk of facing near-term headwinds if the fresh rhetoric from central bank officials drags on interest-rate expectations. 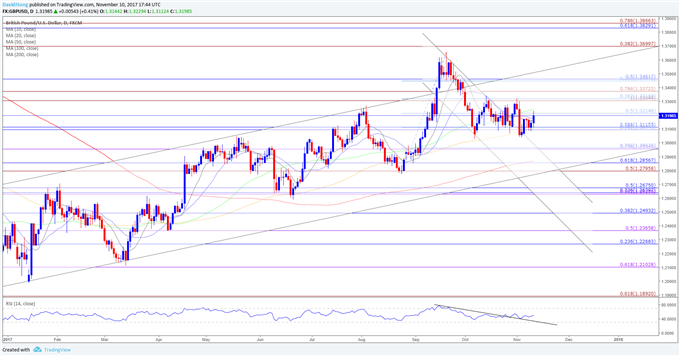 AUD/USD struggles to hold its ground even as the U. of Michigan Confidence survey adds to the mixed bag of data coming out of the U.S. economy, but the pair may stage a recovery over the coming days as Australia’s Wage Price Index (WPI) is expected to pick up for the first time since 2014.

Even though U.S. household sentiment falls back from a 13-year high, the data appears to have had a limited impact on the monetary policy outlook as Fed Fund Futures continue to highlight a greater than 90% probability for a December rate-hike. It seems as though the Federal Open Market Committee (FOMC) led by current Governor Jerome Powell will stay on course to deliver three rate-hikes per year as ‘economic conditions will evolve in a manner that will warrant gradual increases in the federal funds rate.’ However, a slowdown in the U.S. Consumer Price Index (CPI) may sap the appeal of the greenback as the central bank struggles to achieve the 2% target for inflation.

At the same time, signs of faster wage growth accompanied by another 18.8K rise in Australia Employment may keep AUD/USD afloat as it puts pressure on the Reserve Bank of Australia (RBA) to lift the cash rate off of the record-low. The ongoing improvement in the labor market may encourage Governor Philip Lowe and Co. to gradually alter the monetary policy outlook in 2018 as ‘various forward-looking indicators continue to point to solid growth in employment over the period ahead,’ but the central bank appears to be in no rush to normalize monetary policy as ‘growth in housing debt has been outpacing the slow growth in household income for some time.’ With that said, the fresh batch of central bank rhetoric coming out at the next RBA meeting on December 5 may play a key role in shaping the near-term outlook for AUD/USD as market participants continue to gauge the outlook for monetary policy. 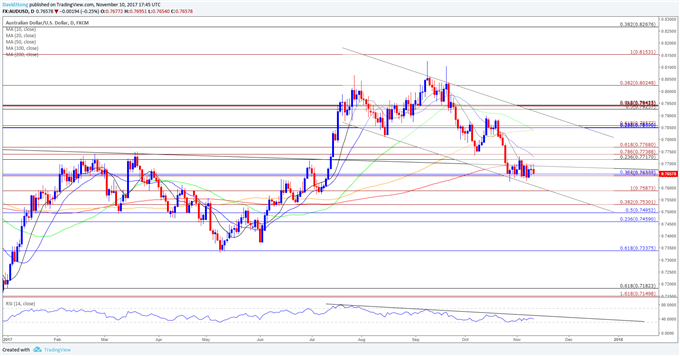 For more resources on popular trading indicators and tools such as the RSI, download and review the FREE DailyFX Advanced trading guides ! 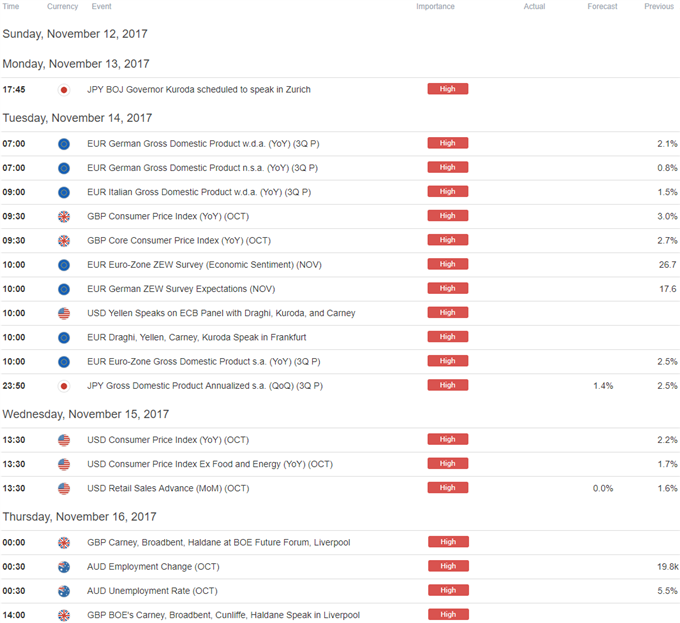 Missed the coverage for the U. of Michigan confidence survey? For a broader discussion on current market themes, sign up and join DailyFX Currency Analyst David Song LIVE for an opportunity to cover potential trade setups!