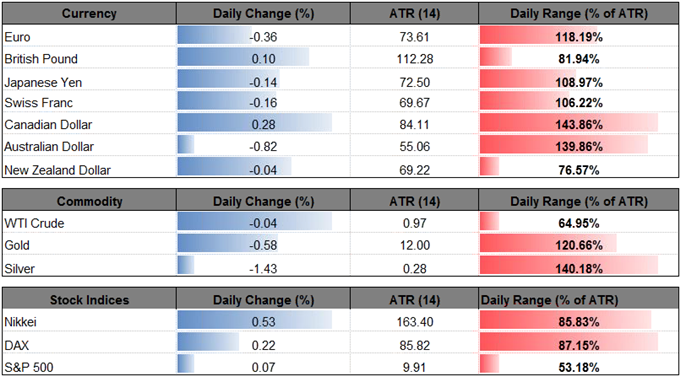 The Canadian dollar outperforms its major counterparts following the above-forecast print for Canada Employment, with USD/CAD at risk for a larger correction as the ongoing improvement in the labor market puts pressure on the Bank of Canada (BoC) to further normalize monetary policy over the coming months.

Even though the headline reading increased 35.3K in October, the gains were led by an 88.7K expansion in full-time employment, with the labor force participation rate bouncing back to an annualized 65.7% from 65.6% the month prior. Signs of a tightening labor market may push the BoC to adopt a more hawkish tone as ‘the Bank estimates that the economy is operating close to its potential,’ and Governor Stephen Poloz and Co. may have little choice to prepare Canadian households and businesses for higher borrowing-costs as officials note ‘less monetary policy stimulus will likely be required over time.’

Keep in mind, the BoC may stick to the sidelines ahead of 2018 as ‘growth is expected to moderate to a more sustainable pace in the second half of 2017 and remain close to potential over the next two years,’ but the near-term advance in USD/CAD may continue to unravel should the key data prints coming out of Canada boost interest-rate expectations. 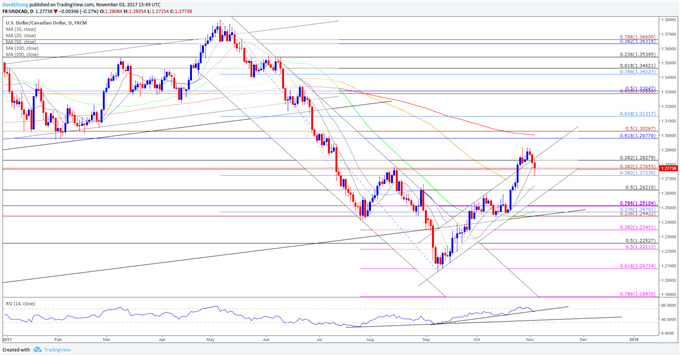 Crude sits near the 2017-high ($55.21) even as U.S. output picks up in October, and oil prices may remain bid ahead of the Organization of the Petroleum Exporting Countries’ (OPEC) meeting on November 30 as the group and its allies pledge to extend their efforts in rebalancing the energy market.

Despite the 2435K decline in U.S. oil inventories, field production continued to pick up in the week ending October 27, with output approaching the 2017-high (9,561). The ongoing recovery in U.S. productivity may put increased pressure on OPEC & Non-OPEC members to prolong their pact to curb supply especially as Saudi Arabia Oil Minister Khalid Al-Falih expects the coalition to ‘renew our resolve to return already improving global inventories to their normal levels.’

With that said, crude prices may stay bid over the near-term as both price and the Relative Strength Index (RSI) preserve the bullish trends carried over from the summer months. However, a string of failed attempt to break the January-high ($55.21) raises the risk for a near-term pullback as the bullish momentum appears to be tapering off. 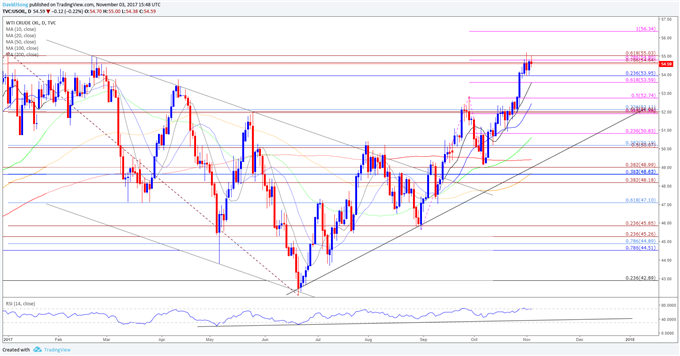 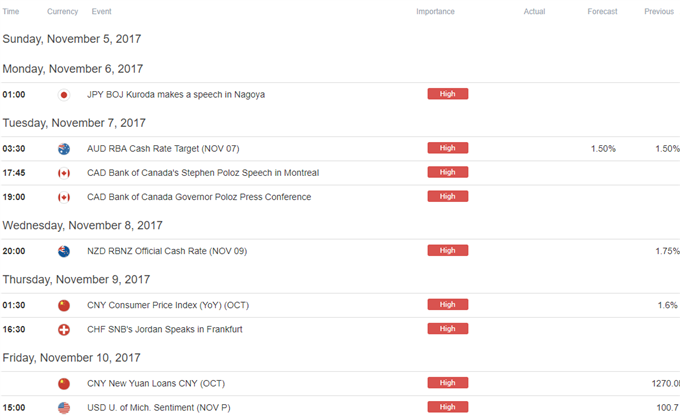