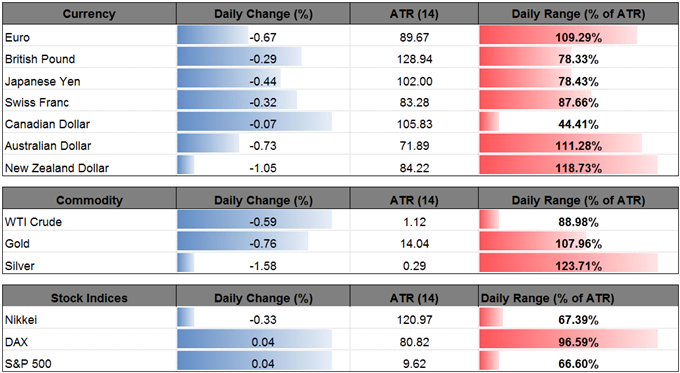 USD/JPY pares the decline from earlier this week, with U.S. Treasury Yields exhibiting a similar behavior as Federal Reserve officials appear to be on course to further normalize monetary policy over the coming months.

Despite the mixed data prints coming out of the U.S. economy, Fed Fund Futures show a greater than 70% probability for a December rate-hike as New York Fed President William Dudley, a permanent voting-member, anticipates ‘inflation will rise and stabilize around the FOMC’s 2 percent objective.’ In turn, fresh remarks from Chair Janet Yellen may continue to boost the appeal of the greenback should the central bank head prepare U.S. households and businesses for higher borrowing-costs. However, less-hawkish remarks from Chair Yellen may drag on the dollar as Fed officials curb the longer-run forecast for the benchmark interest rate, and the dollar-yen may largely preserve the broader range from earlier this year especially as Japan Prime Minister Shinzo Abe plans to dissolve the House of Representatives later this month and hold a snap election in October. 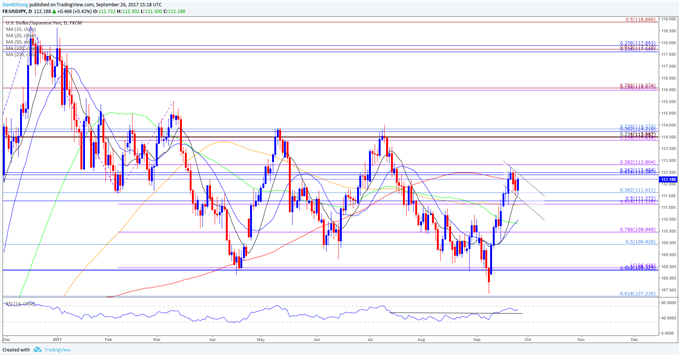 NZD/USD struggles to hold its ground ahead of the Reserve Bank of New Zealand’s (RBNZ) September 28 meeting, with the pair at risk for a further losses as it extends the series of lower highs & lows from the previous week.

With New Zealand now facing a hung parliament, the RBNZ may show a greater willingness to carry the record-low interest rate into 2018 especially as the New Zealand Institute of Economic Research’s (NZIER) Monetary Policy Shadow Board ‘continues to recommend the Reserve Bank leave the Official Cash Rate on hold.’ In turn, the RBNZ may merely attempt to buy more time and reiterate that ‘numerous uncertainties remain and policy may need to adjust accordingly’ as Deputy Governor Grant Spencertakes the helm.

Keep in mind the RBNZ has argued that ‘a lower New Zealand dollar is needed to increase tradables inflation and help deliver more balanced growth,’ but the comments may largely be ignored unless the central bank opens the door to intervene in the currency market. 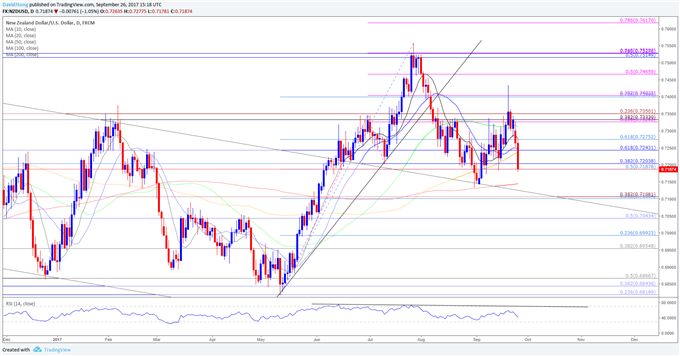