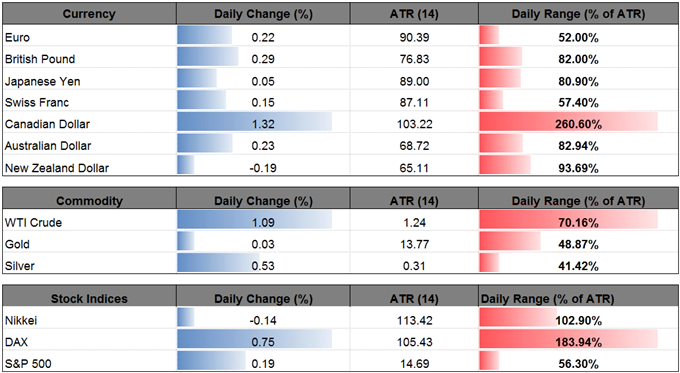 EUR/USD breaks out of the narrow range from earlier this week, with the pair at risk for a further advance as the European Central Bank (ECB) appears to be on course to conclude its quantitative easing (QE) program.

Even though the ECB remains in no rush to remove the zero-interest rate policy (ZIRP), it seems as though the Governing Council will stick to the December deadline for the Public Sector Purchase Programme (PSPP) as officials warn rates will ‘remain at their present levels for an extended period of time, and well past the horizon of our net asset purchases.’ Moreover, the recent comments from President Mario Draghi and Co. suggest the central bank will continue to tolerate the appreciation in the Euro exchange rate as ‘the current positive cyclical momentum increases the chances of a stronger than expected economic upswing,’ and the central bank may continue to gradually alter the monetary policy outlook over the coming months as ‘risks surrounding the euro area growth outlook remain broadly balanced.’ In turn, the shift in EUR/USD behavior may continue to unfold ahead of the next ECB meeting on October 26 as the Governing Council remains confident in achieving the 2% inflation-target over the policy horizon.

Nevertheless, EUR/USD may face a bumpy road ahead of the Federal Open Market Committee (FOMC) interest rate decision on September 20 as Chair Janet Yellen and Co. are also scheduled to release their new projections for growth, inflation and the benchmark interest rate. 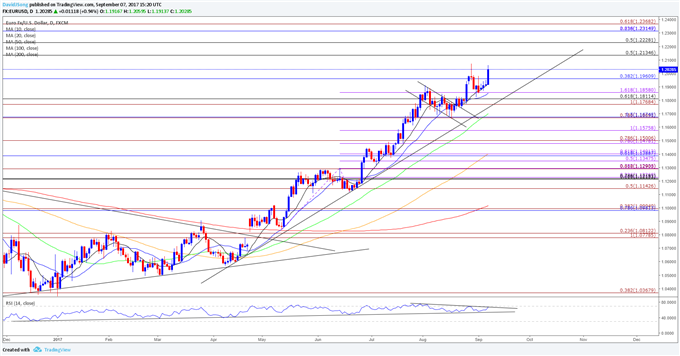 USD/JPY struggles to hold its ground ahead of another batch of Fed rhetoric, and the pair stands at risk for further losses as the 10 and 30 Year U.S. Treasury yield slip to fresh yearly lows.

In light of the mixed rhetoric coming out of the Federal Reserve, comments from Cleveland Fed President Loretta Mester, New York Fed President William Dudley and Kansas City Fed President Esther George may do little to prop up U.S. yields as market participants scale back bets for three rate-hikes in 2017. Fed Fund Futures now highlight a greater than 60% probability Chair Janet Yellen and Co. will keep the benchmark interest rate on hold even at the December meeting, with the U.S. dollar at risk of facing a more bearish fate over the coming months as central bank officials adopt a less-hawkish outlook for monetary policy.

In turn, USD/JPY may threaten the range-bound price action from earlier this year especially as it breaks the April-low (108.13). 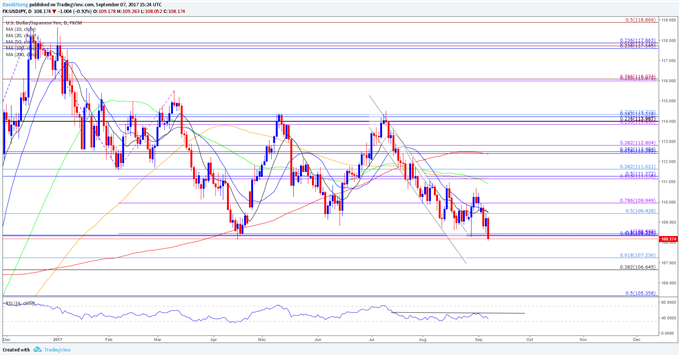 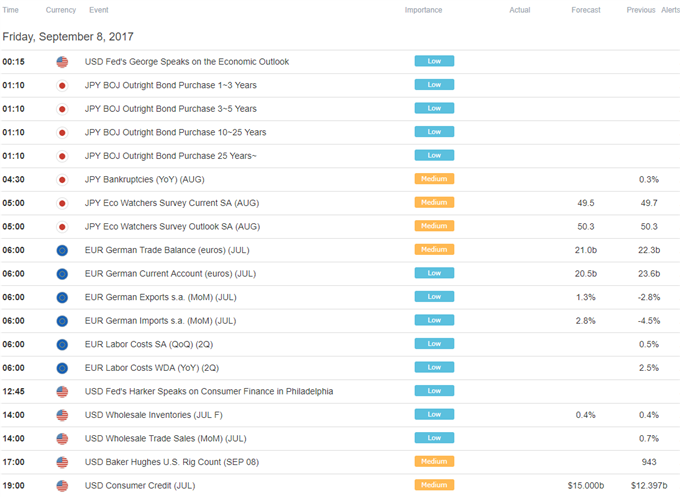