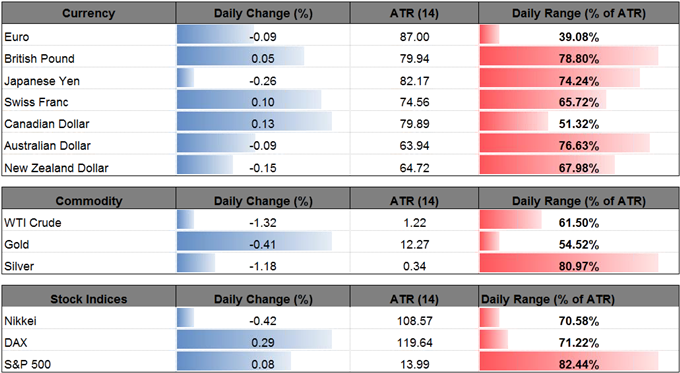 The DAX outperforms its major counterparts, with GER30 at risk for a larger advance should European Central Bank (ECP) President Mario Draghi endorse a wait-and-see approach for monetary policy.

President Draghi may continue to divert attention away from monetary policy as the Governing Council plans to decide the fate of the quantitative easing (QE) program in autumn, and the DAX may face a more bullish fate as ECB officials appear to be in no rush to move away from the highly accommodative stance.

However, recent comments from ECB board member Ardo Hansson suggest the Governing Council may wind down its asset-purchases ahead of the December deadline as central bank officials are ‘more upbeat about Europe than we were a while ago,’ and the DAX stands at risk of extending the bearish formation carried over from June if the Governing Council shows a greater willingness to taper its asset-purchase program over the coming months. 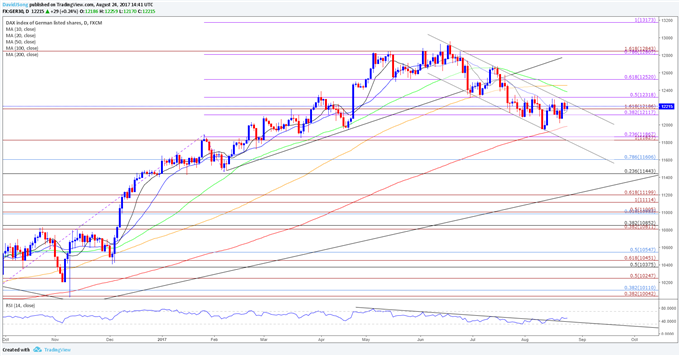 All eyes are on Chair Janet Yellen as the central bank head is scheduled to speak on Friday, and the fresh comments may heavily impact the near-term outlook for the dollar-yen exchange rate especially as the Bank of Japan (BoJ) appears to be on course to carry the Qualitative/Quantitative Easing (QQE) program with Yield Curve Control into 2018. The U.S. dollar may face a bullish reaction if Chair Yellen warn of an imminent rate-hike, and Fed officials may stay on course to further normalize monetary policy over the coming months as ‘the Committee expects to begin implementing its balance sheet normalization program relatively soon.’

However, the prepared remarked may fail to boost interest-rate expectation as the speech will focus on financial stability, and the Federal Open Market Committee (FOMC) may merely attempt to buy more time at interest rate decision on September 20 as many officials‘saw some likelihood that inflation might remain below 2 percent for longer than they currently expected, and several indicated that the risks to the inflation outlook could be tilted to the downside.’ 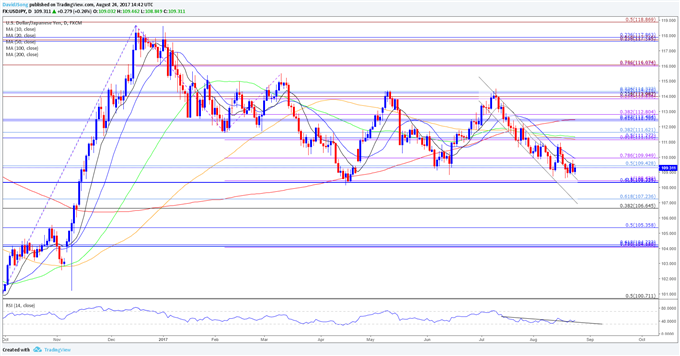