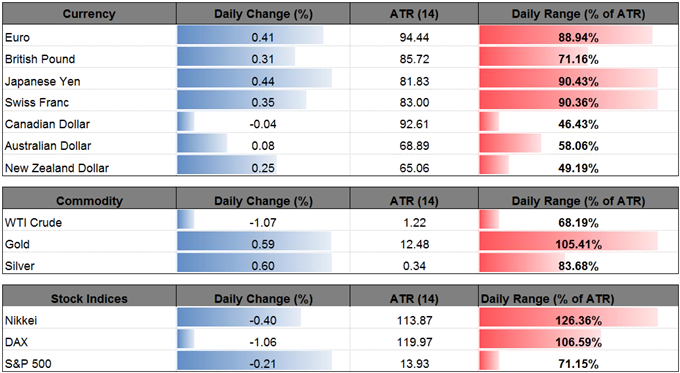 USD/JPY remains under pressure going into the last full-week of August, with the pair at risk of extending the decline from earlier this month as market participants scale back bets for three Fed rate-hikes in 2017.

Downside targets remain on the radar ahead of Kansas City Fed Economic Symposium in Jackson Hole, Wyoming as the Federal Open Market Committee (FOMC) adopts a more cautious tone and warns ‘the recent run of soft inflation readings could prove to be more persistent than the staff expected.’ Even though ‘the Committee expects to begin implementing its balance sheet normalization program relatively soon,’ a growing number of Fed officials may show a greater willingness to retain the current policy throughout the remainder of the year as the central bank struggles to achieve the 2% target for price growth.

In turn, the weakness in U.S. Treasury Yields may persist ahead of the next quarterly meeting in September, and the dollar may continue to exhibit a bearish behavior throughout the remainder of the year should Chair Janet Yellen and Co. project a more shallow path for the Fed Funds rate. 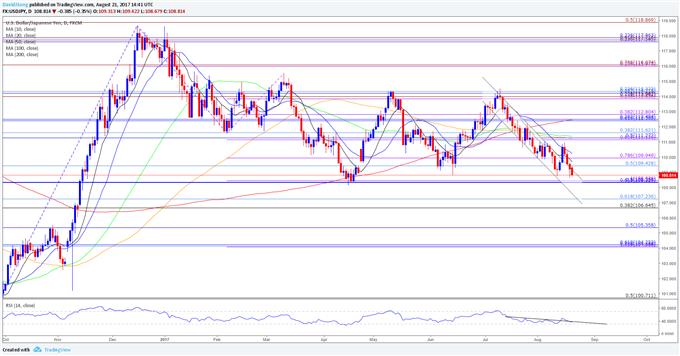 GBP/USD holds a narrow range following the slew of mixed data prints coming of the U.K., but the pair may stage a large rebound over the coming days as it appears to be turning around ahead of the July-low (1.2812).

Bear in mind that Bank of England (BoE) Governor Mark Carney has opted out of the Fed Economic Symposium, with Deputy Governor Ben Broadbent slated to attend the event on behalf of the central bank head. As a result, the BoE official may largely endorse a wait-and-see approach for monetary policy, with the broader bias for Sterling tilted to the downside as the U.K.’s departure from the European Union (EU) clouds the economic outlook with high uncertainty.

Nevertheless, the British Pound may trade on a firmer footing over the coming days as the uptick in Average Hourly Earnings accompanied by the rebound in Retail Sales highlights an improved outlook for the real economy. As a result, a growing number of BoE officials may change their tune over the coming months especially as U.K. wage growth picks up for the first time in January and heightens the threat for above-target inflation. 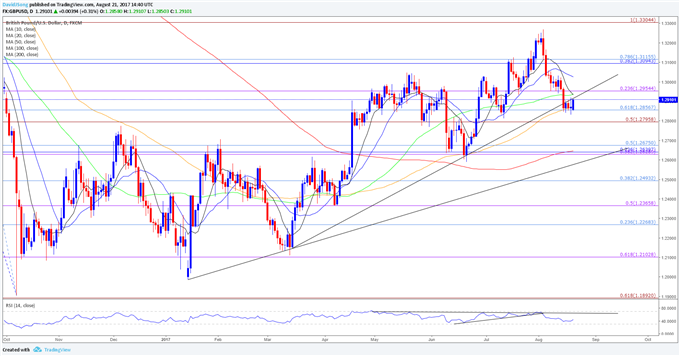