A downtick in the jobless rate paired with another 6.1% expansion in New Zealand Employment may fuel the near-term advance in NZD/USD especially as household earnings are projected to increase for the first time since the second quarter of 2015.

Why Is This Event Important:After cutting the official cash rate to a fresh record-low of 1.75% at the last policy meeting for 2016, the Reserve Bank of New Zealand (RBNZ) may endorse a wait-and-see approach for the foreseeable future as ‘numerous uncertainties remain, particularly in respect of the international outlook,’ but signs of stronger job & wage growth may push Governor Graeme Wheeler to move away from the dovish stance as ‘annual inflation is expected to rise from the December quarter, reflecting the policy stimulus to date, the strength of the domestic economy, and reduced drag from tradables inflation.’

The improvement in the terms of trade accompanied by the pickup in business outputs may foster a stronger-than-expected employment report, and a further improvement in labor market dynamics may heighten the appeal of the New Zealand dollar as it puts pressure on the RBNZ to move away from its easing-cycle.

However,easing home sales along with the slowdown in building activity may drag on hiring, and a dismal development may produce near-term headwinds for the New Zealand dollar as it drags on interest rate expectations. 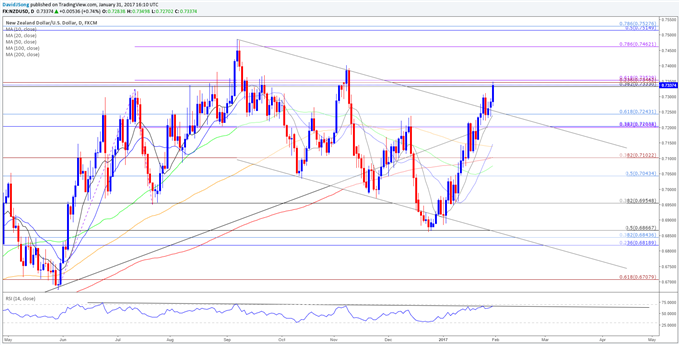 New Zealand Employment increased an annualized 6.1% during the three-months through September, with the jobless rate narrowing to 4.9% per annum from a revised 5.0% in the second quarter, while the labor force participation rate advanced to 70.1% amid forecasts for a 69.7% print. Despite the pickup in job growth, Private Wages excluding Overtime held steady at an annualized 0.4% for the fifth consecutive quarter, and the Reserve Bank of New Zealand (RBNZ) may preserve the record-low interest rate throughout 2017 in an effort to combat the ongoing weakness in household earnings. The New Zealand dollar gained ground following the improvement in labor market dynamics, with NZD/USD climbing above the 0.7225 region to end the day at 0.7287.