- If the Fed Retains Current Policy, Will the Statement Reflect a Greater Dissent?

According to a Bloomberg News survey, 59 of the 113 economists polled see the Federal Open Market Committee (FOMC) retaining its current policy in September, but the fresh updates coming out of the central bank may boost the appeal of the greenback and spur a near-term decline in EUR/USD should Chair Janet Yellen keep a 2015 rate hike on the table.

Why Is This Event Important:Another unanimous vote to remain on hold may erode the bullish sentiment surrounding the greenback as it drags on rate expectations, but signs of a greater dissent may keep the committee on course to remove the zero-interest rate policy (ZIRP) later this year as central bank officials anticipate a stronger recovery to emerge going forward.

The Fed may keep the door open to raise the benchmark interest rate later this year as the economy approaches full-employment, and a surprise rate-hike or hints of a December liftoff may generate a near-term rally in the dollar as market participants price higher borrowing-costs for the U.S.

However, subdued inflation paired with the ongoing weakness in personal consumption may encourage the Fed to further support the real economy, and a dovish policy statement accompanied by a marked downward revision in the interest rate forecast may spur a sell-off in the greenback as market participants scale back bets for a rate hike in 2015. 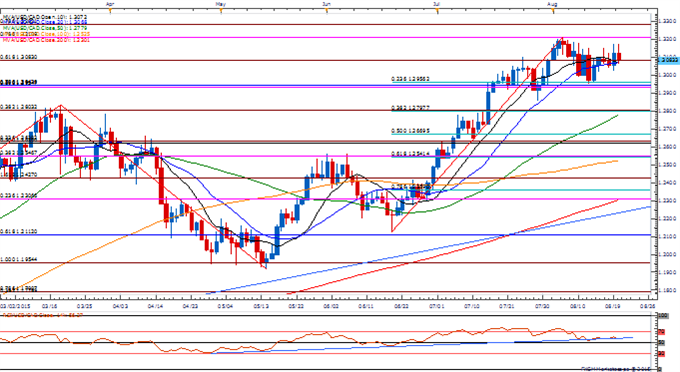 The Federal Open Market Committee (FOMC) stuck to the sidelines in July and continued to endorse a wait-and-see approach as the central bank looks for afurther improvement in labor market. As the Fed remains ‘data dependent,’ signs of a stronger recovery may keep the central bank on track to raise the benchmark interest rate in 2015, and we may see a growing number of Fed officials adopt a more hawkish tone over the coming months as Chair Janet Yellen anticipates a stronger recovery to materialize over the remainder of the year. The dollar strengthened as the Fed remains upbeat on the economy, with EUR/USD quickly slipping back below the 1.1050 region to end the day at 1.0979.