- Will a Greater Number of Fed Officials Show a Growing Concern USD Strength?

Why Is This Event Important:Despite fears of a slowing recovery, the Fed may continue to relay an optimistic outlook as it looks past the temporary/transitory factors dragging on the real economy, and the central bank may stay on course to normalize monetary policy in 2015 as it anticipates a stronger expansion in the coming months.

The FOMC may continue to strike an upbeat outlook for the region as Chair Janet Yellen remains confident in achieving the dual mandate, and fresh batch of central bank rhetoric may instill a more bullish outlook for the greenback as the committee prepares to remove the zero-interest rate policy (ZIRP).

Nevertheless, the slowdown in growth and inflation may become a growing concern for the central bank, and we may see a growing number of Fed officials favor a further delay in the normalization cycle as committee struggles to achieve its 2% target for price growth. 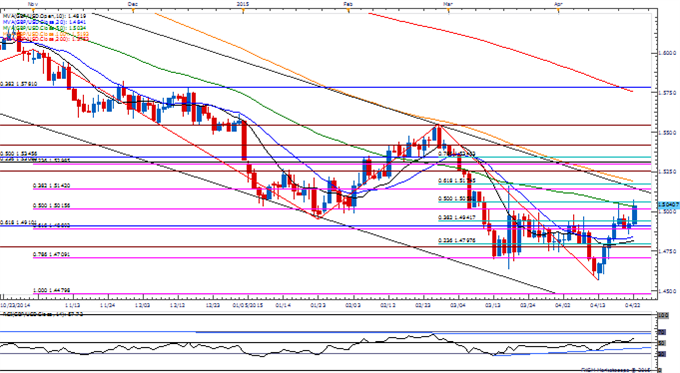 The Federal Open Market Committee (FOMC) meeting minutes showed another unanimous vote to retain the current policy, but revealed signs of a split over the timing for liftoff. While several officials saw scope for a mid-2015 rate hike, other favored a further delay in the normalization cycle, with a few members even preferring to remove the zero-interest rate policy (ZIRP) in 2016. Despite the mixed outlook, it seems as though the Fed remains on course to normalize monetary policy ahead of its major counterparts as the central bank remains confident in achieving its 2% inflation target over the policy horizon. The greenback strengthened following the upbeat statement, with EURUSD dipping below the 1.0800 handle to end the day at 1.0779.