Another contraction in Canada Retail Sales paired with a slowdown in the core Consumer Price Index (CPI) may trigger a near-term breakout in USD/CAD as it fuels speculation for another Bank of Canada (BOC) rate cut in 2015.

Indeed, a slew of dismal developments may heighten the bearish sentiment surrounding the Canadian dollar and push BoC Governor Stephen Poloz to adopt a more dovish tone for monetary policy as the central bank increases its efforts to mitigate the risks surrounding real economy.

Canadian firms may continue to offer discounted prices amid the weakness in private-sector consumption, and a sharp slowdown in price growth may generate fresh monthly highs in USD/CAD as it puts increased pressure on the BoC to further reduce the benchmark interest rate.

Nevertheless, the ongoing recovery in the labor market along with prospects for a stronger recovery may generate sticky price growth in Canada, and a batch of better-than-expected data may keep the dollar-loonie capped over the near-term especially as the Federal Reserve pushes out its interest rate forecast. 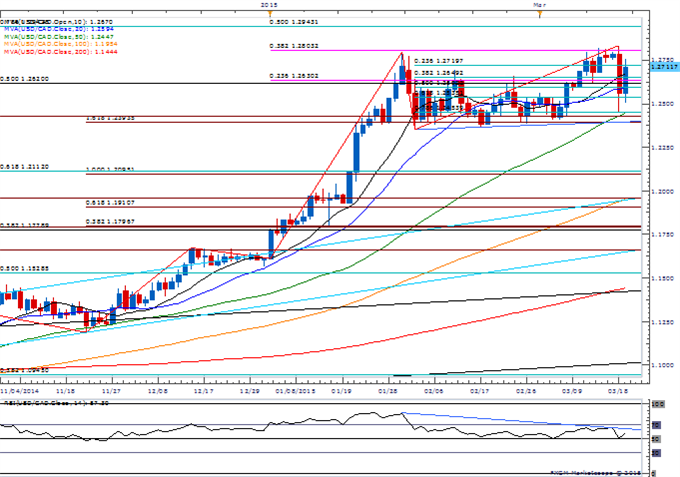 GBPCAD at Support- Scalps Target 1.8785 Ahead of Key Data

Canada’s Consumer Price Index (CPI) slowed for the third consecutive month in January, with the headline reading slipping to an annualized 1.0% to mark the lowest print since November 2013. At the same time, the core rate of inflation unexpectedly held steady at 2.2% for the second-month, and the stickiness in price growth may encourage the Bank of Canada (BoC) to retain its current policy throughout 2015 following the surprise rate cut at the January 21 meeting. Despite the stronger-than-expected CPI prints, the Canadian dollar struggled to hold its ground following the release, with USD/CAD climbing above the 1.2500 handle to end the day at 1.2511.