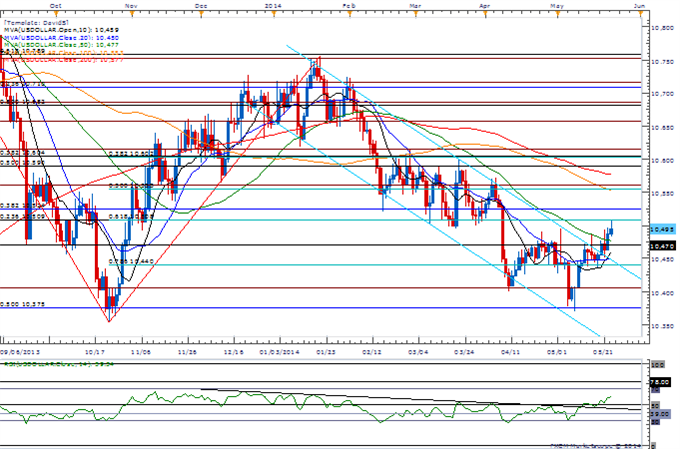 The rebound in New Home Sales did little to spur a further advance in the Dow Jones-FXCM U.S. Dollar Index (Ticker: USDollar), and the greenback may face a near-term pullback going into the final week of May as it fails to push back above former support (10,500-509).

The greenback may consolidate ahead of the preliminary 1Q GDP print as the report is expected to show the growth rate contracting 0.5 percent during the first three-months of 2014, and a marked downward revision may dampen the appeal of the reserve currency as it drags on interest rate expectations.

Despite the bullish break in price and the Relative Strength Index (RSI), it looks as though the Fed will retain its current approach at the June 18 meeting, and the USDOLLAR remains at risk of carving lower highs & lower lows during the summer months as Chair Janet Yellen continues to endorse a dovish outlook for monetary policy. 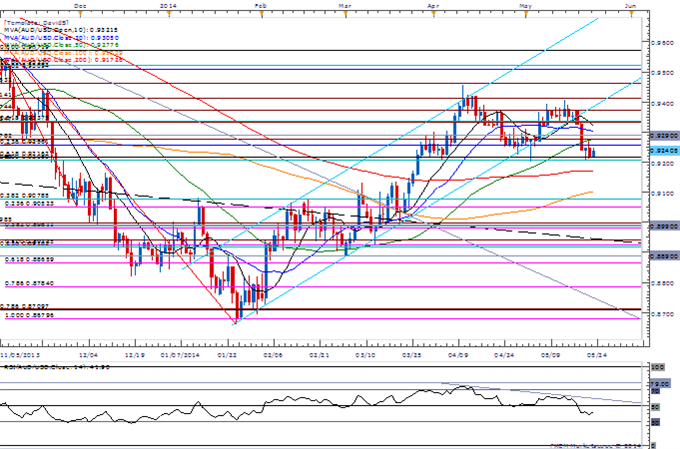 The greenback rallied against three of the four components, led by a 0.17 percent decline in the Euro, while the Australian dollar bucked the trend as the AUD/USD continues to hold above the key 0.9200-20 support zone.

With that said, the AUD/USD may continue to consolidate ahead of the next Reserve Bank of Australia (RBA) interest rate decision on June 3, but the economic developments coming out of the $1T economy may drag on the higher-yielding currency as 1Q Private Capital Expenditures, a proxy for business spending, is expected to contract another 1.9 percent following the biggest decline since 2009.

In turn, the RBA may come under increased pressure to further embark on the easing cycle, and the AUD/USD may struggle to hold its ground in June should Governor Glenn Stevens open the door for another rate cut.