Bearish AUD/USD Outlook Favored on Close Below 0.9200 Amid Dovish RBA

- USDOLLAR Continues to Threaten 10,470 Pivot Ahead of FOMC Minutes

The Dow Jones-FXCM U.S. Dollar Index (Ticker: USDollar) appears to be making another attempt to break out of the bearish formation from earlier this year, but the greenback may mark another failed attempt to close above the 10,470 pivot as we are likely to get more of the same from the Federal Open Market Committee (FOMC) Minutes.

There’s a limited risk of seeing a material shift in the Fed’s policy outlook as the central bank remains in no rush to normalize monetary policy, and the committee looks poised to retain its current approach going into the second-half of 2014 as Chair Janet Yellen remains reluctant to move away from the zero-interest rate policy (ZIRP).

Despite expectations of seeing another $10B taper at the June 18 meeting, the bar remains high for the Fed to normalize monetary policy ahead of schedule, and the USDOLLAR may resume the downward trend from earlier this year as the central bank continues to endorse its highly accommodative policy stance. 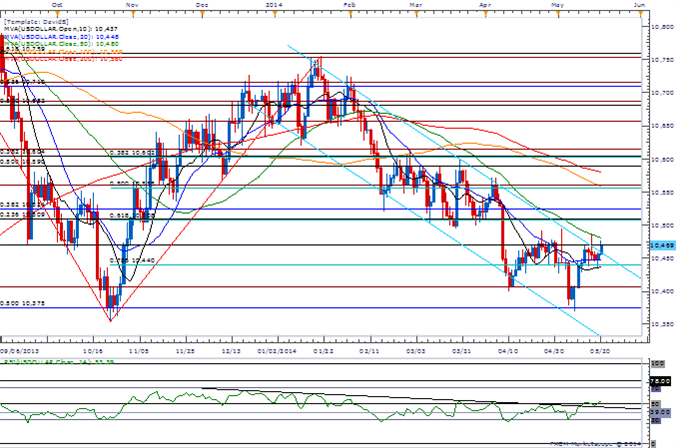