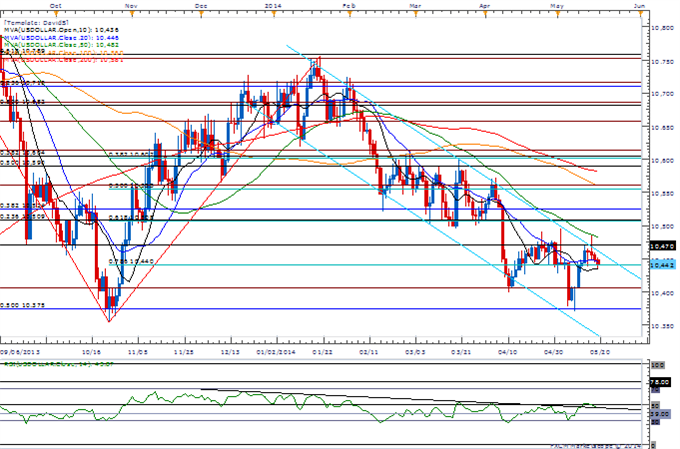 The lack of momentum to hold above the 10,440 pivot raises the risk of seeing a further decline in the Dow Jones-FXCM U.S. Dollar Index (Ticker: USDollar), and the bearish sentiment surrounding the greenback may continue to gather pace over the remainder of the month as it carves out a lower high in May.

The Federal Open Market Committee (FOMC) Minutes may do little to prop up the greenback as the bar remains high to see a material shift in the policy outlook, and the reserve currency remains at risk of testing fresh lows over the near-term as Chair Janet Yellen remains reluctant to move away from the zero-interest rate policy (ZIRP).

With that said, a close below 10,440 would bring up the 1.618 percent Fibonacci expansion around 10,406, and we will retain our current approach to ‘sell bounces’ in the greenback as the Fed retains its current approach for monetary policy. 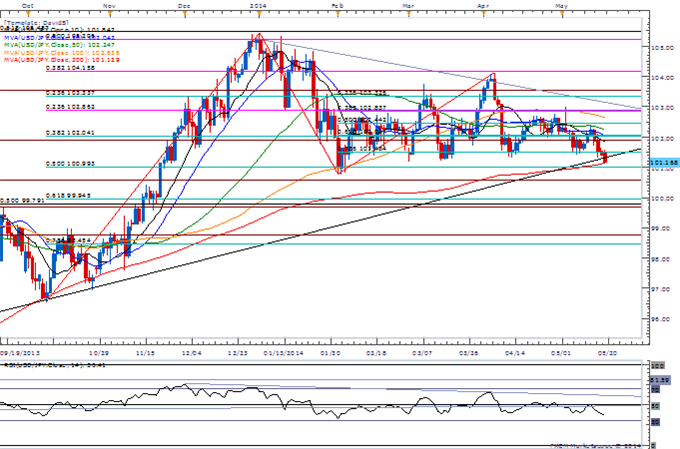 The greenback lost ground against three of the four components, led by a 0.32 percent rally in the Japanese Yen, and the USD/JPY may continue to threaten the bullish trend carried over from the previous year should the Bank of Japan (BoJ) interest rate decision spur a more meaningful shift in the policy outlook.

The BoJ may turn increasingly upbeat towards the economy amid the marked uptick in Japan’s 1Q GDP print, and the Governor Haruhiko Kuroda may continue to talk down bets for a further expansion in the asset-purchase program as the central bank remains very confident in achieving the 2 percent target for inflation.

With that said, a less-dovish policy statement accompanying the BoJ interest rate decision may heighten the appeal of the Japanese Yen, and the USD/JPY may continue to give back the advance carried over from the previous year amid the growing deviation in the policy outlook.