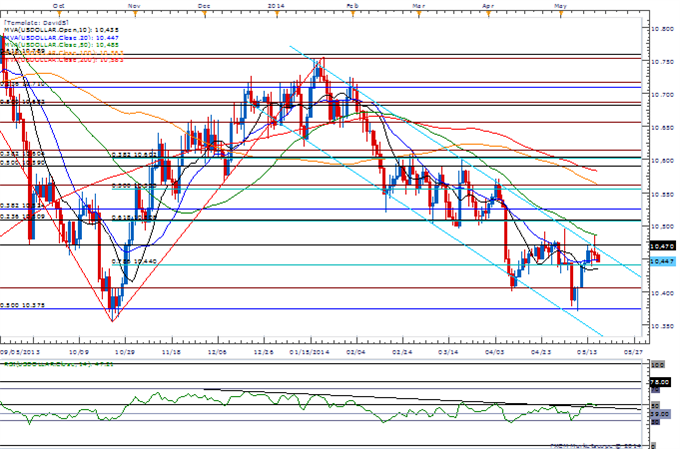 - USDOLLAR to Retain Bearish Trend Amid Lack of Momentum to Close Above 10,470

The string of failed attempts to close above the 10,470 pivot casts a bearish outlook for the Dow Jones-FXCM U.S. Dollar Index (Ticker: USDollar), and the greenback may continue to carve a series of lower highs & lower lows over the reminder of the month as the Federal Open Market Committee (FOMC) sticks to its current approach for monetary policy.

Despite the positive developments coming out of the world’s largest economy, we are likely to get more of the same with the FOMC Minutes as Fed Chair Janet Yellen remains reluctant to move away from the zero-interest rate policy (ZIRP), and the downward trending channel may continue to take shape in the second-half of the year as the bar remains high for the central bank to deviate from its current course.

With that said, the technical developments continue to favor ‘selling bounces’ in the greenback, and the reserve currency could be on its way to fresh 2014 lows as it appears to have carved a lower high in May 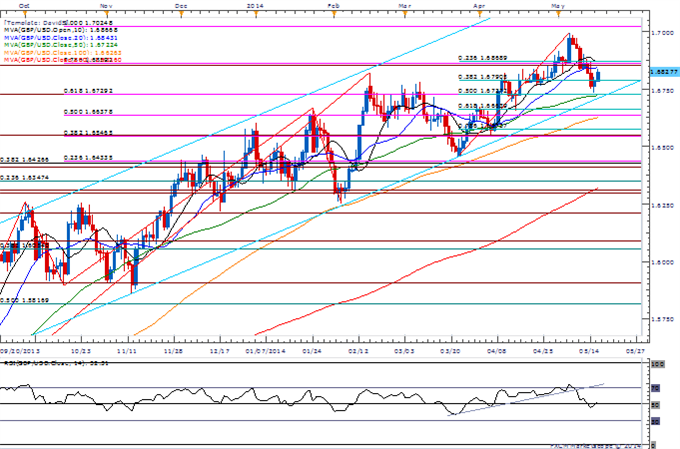 The greenback weakened against three of the four components, led by a 0.23 percent advance in the British Pound, and the GBP/USD may continue to retrace the decline from earlier this month as the headline & core reading for U.K. inflation is expected to pick up in April.

At the same time, the Bank of England (BoE) Minutes may further the bullish outlook for the sterling should we see a growing number of central bank officials show a greater willingness to normalize monetary policy sooner rather than later, and the pound-dollar may target fresh 2014 highs in the days ahead as it carves a higher low in May.

With that said, a slew of positive developments coming out of the U.K. economy may trigger a more meaningful run at the 1.7000 handle, and we will retain a bullish outlook for the GBP/USD amid the ongoing shift in the policy outlook.