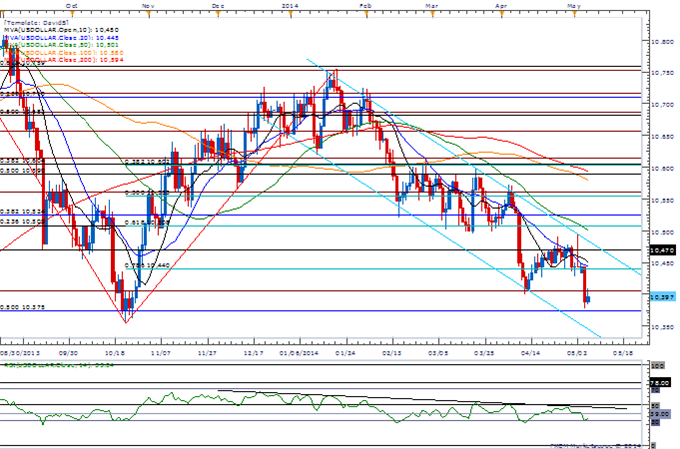 The short-term rebound in the Dow Jones-FXCM U.S. Dollar Index (Ticker: USDollar) may offer a selling opportunity for FX traders as the Federal Open Market Committee (FOMC) remains in no rush to normalize monetary policy.

Despite the balanced tone struck by Fed Chair Janet Yellen, the fresh batch of central bank rhetoric provides little evidence of seeing a material shift in the policy outlook, and the bearish sentiment surrounding the greenback may get carried into the second-half of 2014 as the central bank remains reluctant to move away from its highly accommodative policy stance.

As a result, we will look for another lower high in the days ahead as the USDOLLAR retains the bearish trend from earlier this year, and will preserve our approach to ‘sell bounces’ in the greenback as the cautious tone held by the central bank continues to drag on interest rate expectations.

Price & Time: USD/JPY About to Surprise? 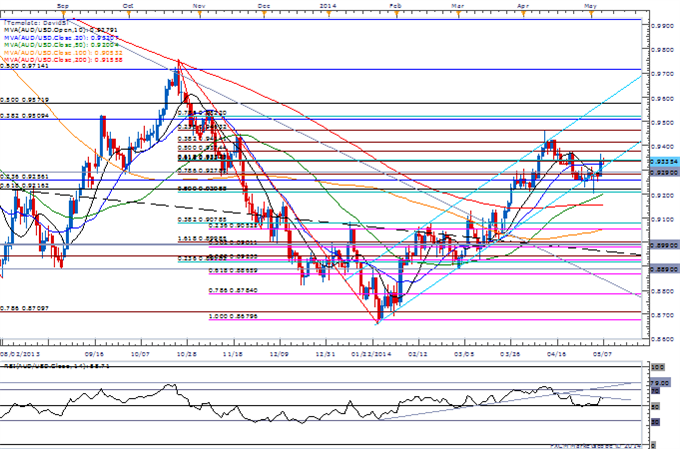 The greenback advanced against all four components, led by a 0.14 percent drop in the Australian dollar, and the AUD/USD may face a larger decline over the near-term as the bearish RSI momentum takes shape. However, another 8.8K rise in Australia Employment may prop up the higher-yielding currency as it raises the growth outlook for the $1T economy, and the AUD/USD may trade on a firmer footing in the second-half of the year as the positive developments coming out of the region boosts interest rate expectations.

Nevertheless, the Reserve Bank of Australia (RBA) may come under increased pressure to weaken the local currency as it undermines the central bank’s upbeat assessment for 2014, and Governor Glenn Stevens may have little choice but to act against the Australian dollar as market participants no longer react to the verbal intervention.

With that said, wewill closely monitor the RSI as the oscillator highlights a lower high in the exchange rate, but we need a break and a close below the 0.9200 handle to adopt a more bearish forecast for the AUD/USD as it continues to hold up as near-term support.