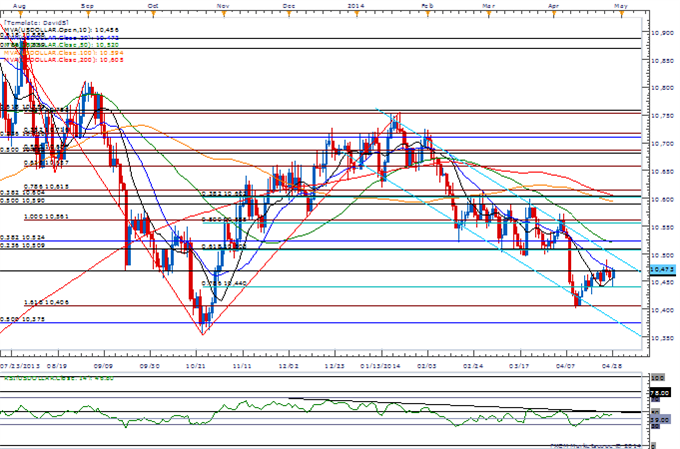 - USDOLLAR Risks Further Losses on Another Failed Close Above 10,470

The lack of momentum to close above the 10,470 pivot may continue to highlight a near-term topping process for the Dow Jones-FXCM U.S. Dollar Index (Ticker: USDollar), and the greenback may continue to carve a series of lower highs & lower lows in May should the Federal Open Market Committee (FOMC) retain a dovish outlook for monetary policy.

Indeed, the advance GDP report is expected to show the world’s largest economy slowing to an annualized 1.2% in the first-quarter, and the persistent slack in private sector activity may encourage central bank Chair Janet Yellen to retain the zero-interest rate policy (ZIRP) for an extended period of time in an effort to limit the downside risk for growth and inflation.

With that said, a marked slowdown in the growth rate paired with a dovish Fed statement may spur a further decline in the dollar ahead of the highly anticipated Non-Farm Payrolls(NFP) report, and the greenback remains at risk of giving back the advance from back in October (10,354) should interest rate expectations deteriorate further.

Looking for the Best Strategy in Current Forex Market Conditions 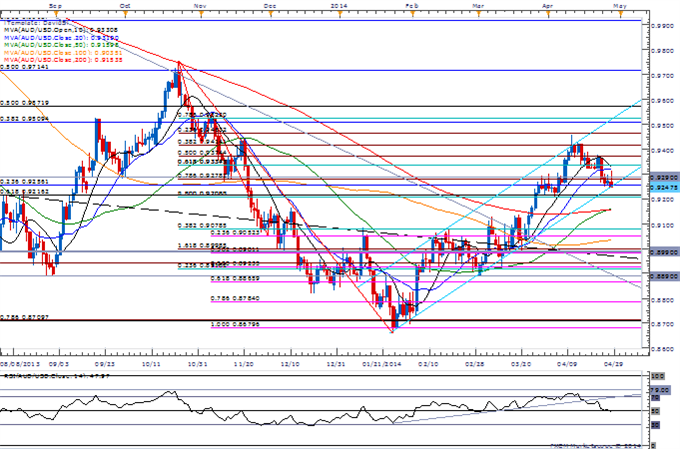 The greenback advanced against two of the four components, led by a 0.34 percent decline in the Australia dollar, and the AUD/USD looks poised to resume the downward trend dating back to 2011 as it appears to have cared a lower high in April.

The AUD/USD faces an increased risk of giving back the advance from earlier this year as price and the Relative Strength Index (RSI) fail to maintain the bullish trends, and the Australian dollar may trade heavy going into the next Reserve Bank of Australia (RBA) meeting on May 6 as market participants scale back bets of seeing the central bank start to normalize monetary policy later this year.

The RBA may sound more dovish this time around as the recent appreciation in the local currency dampens the outlook for growth and inflation, and Governor Glenn Stevens may take a more aggressive approach in weakening the AUD/USD in an effort to further assist with the rebalancing of the $1T economy.