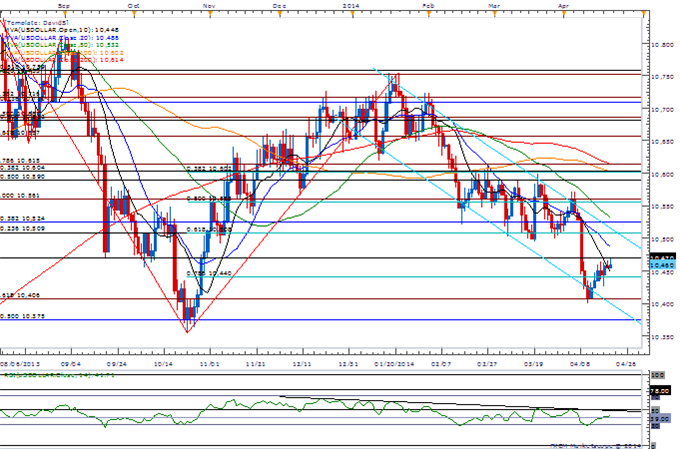 - USDOLLAR Makes Another Failed Assault at 10,470; Lower High in Place?

- AUD/USD Struggles to Preserve Bullish Momentum Ahead of 1Q CPI

Another failed attempt to push and close above the 10,470 pivot may highlight a near-term top in the Dow Jones-FXCM U.S. Dollar Index (Ticker: USDollar), and the greenback may continue to give back the advance from back in October (10,354) as the Federal Reserve remains reluctant to move away from the zero-interest rate policy (ZIRP).

As a result, the bearish sentiment surrounding the reserve currency may gather pace ahead of the Federal Open Market Committee’s (FOMC) April 30 meeting, and we will continue to look for opportunities to ‘sell bounces’ in the greenback as long as price & the Relative Strength Index (RSI) retain the bearish trend from earlier this year.

In turn, the USDOLLAR remains at risk of face fresh lows in the days ahead, and the fundamental developments may continue to have a limited impact in propping up the greenback unless we see a material shift in the Fed’s policy outlook.

Price & Time: End of Month is Key For Gold 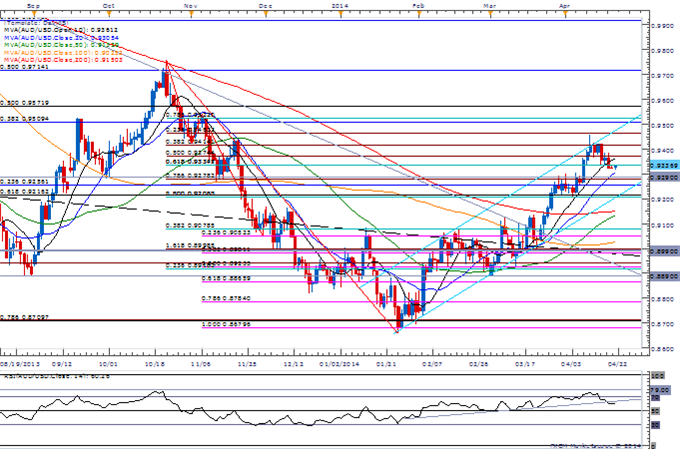 The greenback weakened against two of the four components, led by a 0.05 percent advance in the AUD/USD, and the pair may continue to track higher ahead of Australia’s 1Q Consumer Price report as the headline reading for inflation is expected to breach the Reserve Bank of Australia’s (RBA) 1-3 percent target band for the first time since 2011.

Indeed, heightening price pressures in the $1T economy may put increased pressure on the RBA to normalize monetary policy sooner rather than later, but the central bank may face greater headwinds in managing monetary policy as Governor Glenn Stevens anticipates higher unemployment along a further slowdown in mining investment.

Nevertheless, the technical out is becoming increasingly bearish for the AUD/USD as the RSI fails to retain the upward trend from earlier this year, and pair may face a larger decline this week should the 1Q CPI print fall short of market expectations.