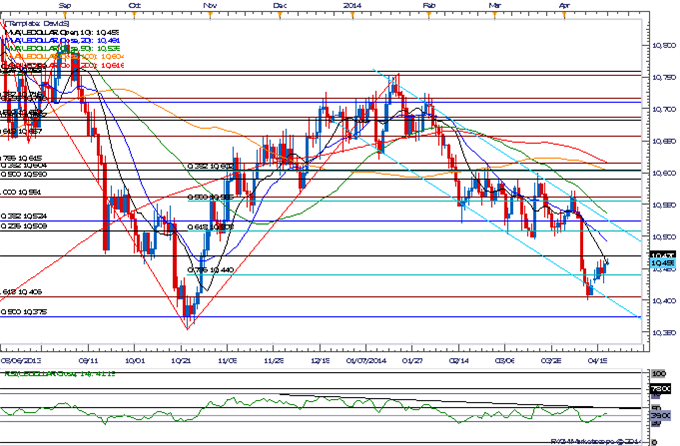 - USDOLLAR Continues to Hold Below 10,470 Resistance Amid Holiday Trade

The lack of momentum to break above the 10,470 pivot may foster a bearish forecast for the Dow Jones-FXCM U.S. Dollar Index (Ticker: USDollar), but the fundamental developments coming out of the world’s largest economy may heighten the appeal of the greenback as the resilience in private sector consumption raises the outlook for growth and inflation.

Indeed, another uptick in orders for U.S. Durable Goods paired with an upward revision in the U. of Michigan Confidence survey may put increased pressure on the Federal Reserve to normalize monetary policy sooner rather than later, but the reluctance to move away from the zero-interest rate policy (ZIRP) may continue to fuel the bearish sentiment surrounding the reserve currency as central bank Chair Janet Yellen continues to highlight the ongoing slack in private sector activity.

With that said, the bar remains high of seeing a material shift in the Fed’s policy outlook, and the USDOLLAR remains at risk for further losses as long as price & the Relative Strength Index (RSI) retain the bearish trend from earlier this year. 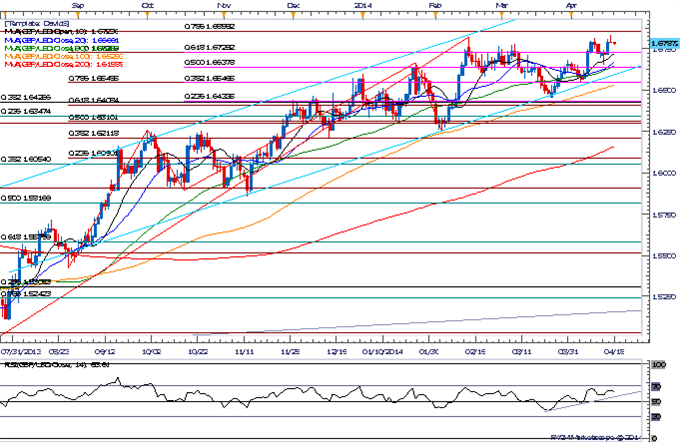 The greenback ticked higher against two of the four components, with the British Pound and Japanese Yen dipping 0.3 percent, but the Bank of England (BoE) Minutes due out next week may spark fresh highs in the GBP/USD as the central bank comes under increased pressure to move away from its highly accommodative policy stance.

Indeed, the stronger recovery in the U.K. may raise the BoE’s scope to raise the benchmark interest rate ahead of schedule as rising home prices paired with the pickup in real wage growth raises the threat for inflation, and the central bank may do little to halt the ongoing appreciation in the British Pound as it helps the Monetary Policy Committee (MPC) achieve the 2 percent target for price growth.

In turn, we continue to favor the topside targets for the GBP/USD, and will look for opportunities to ‘buy dips’ as the pair continues to carve a series of higher highs & higher lows.