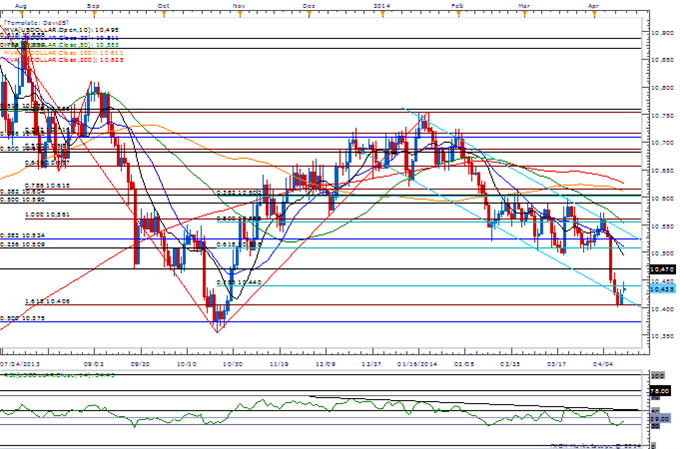 - AUD/USD Looks for Another Close Above 0.9400 Ahead of RBA Minutes.

The Dow Jones-FXCM U.S. Dollar Index (Ticker: USDollar) is struggling to preserve the advance to 10,448despite the better-than-expected U.S. Retail Sales report, and we will continue to look for opportunities to ‘sell bounces’ in the greenback as it retains the bearish trend from earlier this year.

Indeed, the USDOLLAR may face a larger rebound over the next 24-hours of trade as the headline reading for U.S. inflation is expected to pick-up in March, but the reserve currency may continue to carve a series of lower highs & lower lows on a longer-term timeframe unless we see a material shift in the Federal Open Market Committee’s (FOMC) policy outlook.

With Fed Chair Janet Yellen scheduled to speak later this week, market participants may overlook the positive data coming out of the world’s largest economy as the central bank head retains a cautious tone for the region, and the bearish sentiment surrounding the reserve currency may get carried into the second-half of 2014 as the Fed looks to retain its asset-purchase program until October.

US Dollar Trades Near Key Levels - What are we Watching? 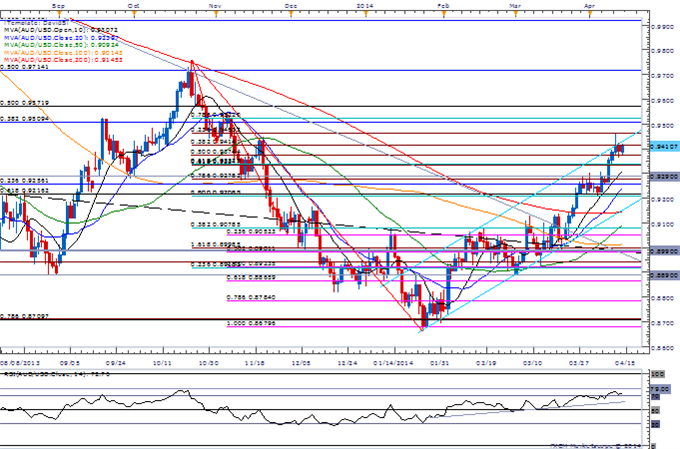 Two of the four components strengthened against the greenback, led by a 0.17 percent rally in the Australian dollar, and the AUD/USD may attempt to mark another close above the 0.9400 handle as it benefits from the rise in risk appetite.

However, the Reserve Bank of Australia (RBA) Minutes may dampen the appeal of the higher-yielding currency should Governor Glenn Stevens scale back his upbeat tone for the $1T economy, and the board may take a more aggressive approach in weakening the Australian dollar as it undermines the central bank’s outlook for a stronger recovery in 2014.

With the AUD/USD still overbought, a more dovish RBA policy statement may initiate a near-term correction, but we will need to see the Relative Strength Index (RSI) break down from the bullish trend to favor the downside targets in the days ahead.