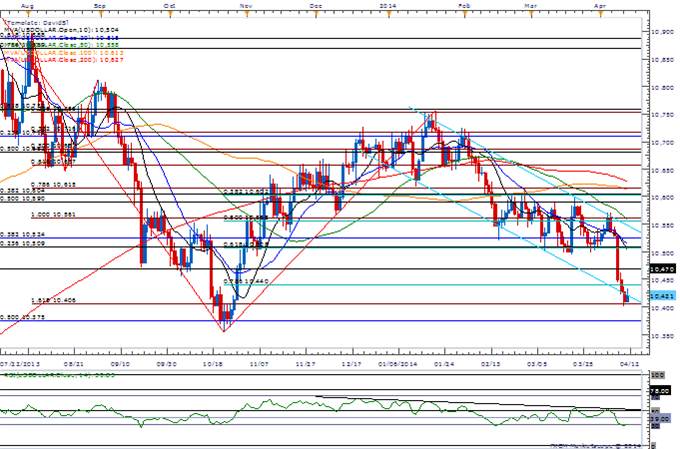 - USDOLLAR Fails to Benefit From Stronger-than-Expected PPI, U. of Michigan Confidence.

The Dow Jones-FXCM U.S. Dollar Index (Ticker: USDollar) looks posed for a larger rebound as it holds above the 10,400 handle, but we will continue to look for opportunities to ‘selling bounces’ in the greenback as price and the Relative Strength Index (RSI) retain the bearish trend from earlier this year.

Indeed, the limited market reaction to the positive U.S. data prints continues to highlight the bearish sentiment surrounding the reserve currency, and the greenback may continue to carve a series of lower highs & lower lows throughout the remainder of the month as Fed Chair Janet Yellen remains in no rush to normalize monetary policy.

As a result, the fundamental developments coming out next week may do little to alter the Fed’s policy outlook as the central bank retains a cautious tone for the U.S. economy, and the dollar may continue to give back the advance from back in October (10,354) as the Federal Open Market Committee (FOMC) plans to further expand its balance sheet well into the second-half of 2014. 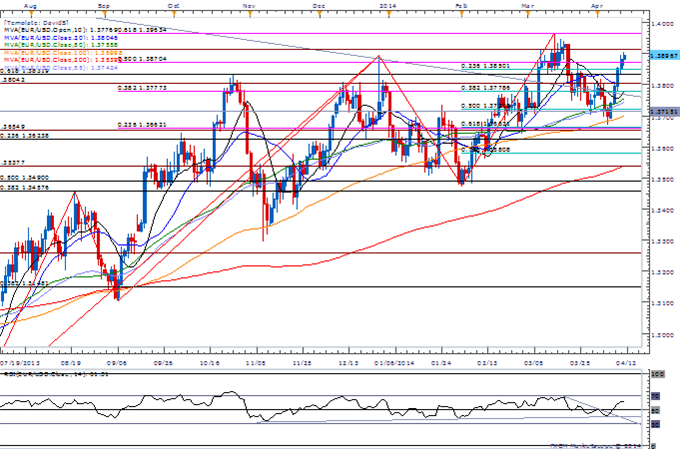 The greenback gained ground against three of the four components, led by a 0.18 percent decline in the Australian dollar, while the EUR/USD bucked the trend, with the single currency advancing 0.09 percent.

The EUR/USD could be well on its way to the 1.4000 handle as the pair carves a higher low above interim support, but the press conference with European Central Bank (ECB) President Mario Draghi on April 13 may heavily influence the Euro next week as the Governing Council shows a greater willingness to further embark on its easing cycle.

With that said, the EUR/USD may struggle to preserve the advance from earlier this week should Mr. Draghi layout a more detailed quantitative-easing (QE) program, and the single currency may face a short-term pullback in the days ahead should the fresh batch of central bank rhetoric drag on interest rate expectations.