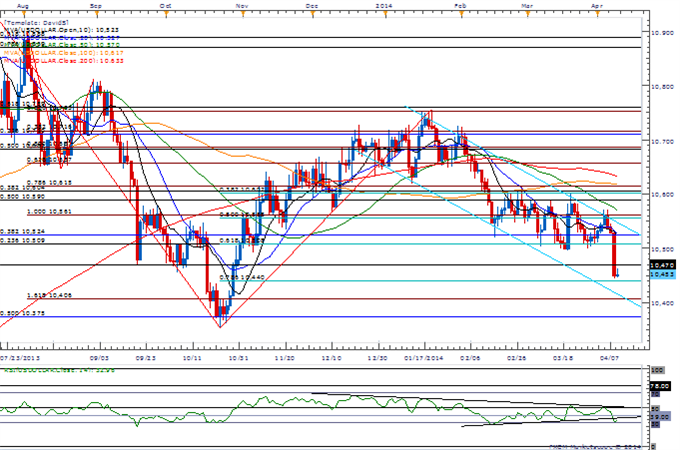 USDOLLAR May Fail to Benefit from FOMC Minutes- AUD/USD Eyes 0.9400

- USDOLLAR Continues to Search for Lower Low Ahead of FOMC Minutes

The Dow Jones-FXCM U.S. Dollar Index (Ticker: USDollar) is struggling to hold the advance to 10,464, and the Federal Open Market Committee (FOMC) Minutes may do little do prop up the reserve currency as the central bank plans to retain its asset-purchase program well into the second-half of 2014.

The bearish sentiment surrounding the greenback may gather pace ahead of the next Fed meeting on April 30 as Chair Janet Yellen remains reluctant to normalize monetary policy, and would need a material shift in the policy outlook to look for a key reversal in the greenback as the central bank appears to be in no rush to move away from its easing cycle.

With that said, the dollar remains at risk of giving back the advance from back in October (10,354) as it continues to search for a lower low, and we continue to favor ‘selling bounces’ in the reserve currency as price and the Relative Strength Index (RSI) preserve the bearish trend from earlier this year. 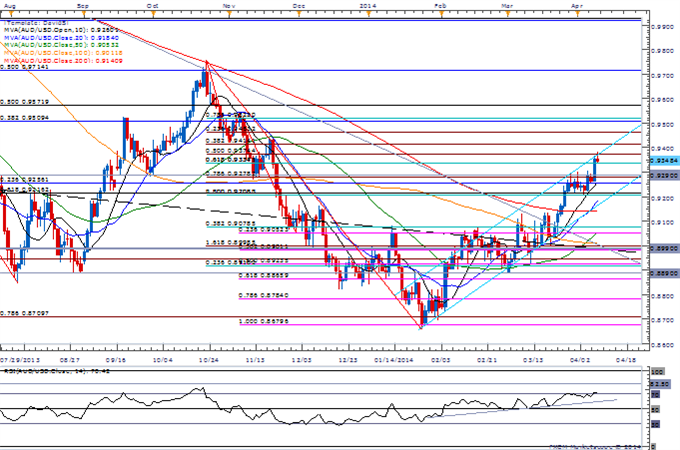 The greenback rallied against two of the four components led by a 0.12 percent decline in the Australian dollar, and the AUD/USD may face a larger pullback in the coming days as it comes up against trendline resistance.

Nevertheless, another 2.5K rise in Australia Employment may limit the downside for the aussie-dollar, but a rise in the jobless rate to 6.1 percent – an 11-year high – may put increased pressure on the Reserve Bank of Australia (RBA) to further embark on its easing cycle in an effort to further assist with the rebalancing of the real economy.

In turn, the AUD/USD may have made a high for the month as it struggles to clear the 0.9400 handle, and we will look to ‘buy dips’ following a near-term correction only if price and RSI retain the bullish trend dating back to February.