AUD/USD Limited by Former Support Ahead of RBA- Fresh High on Tap?

The Dow Jones-FXCM U.S. Dollar Index (Ticker: USDollar) continued to show a limited reaction to the fundamental data prints coming out of the world’s largest economy, and the greenback remains at risk of facing a further decline over the near-term as it continues to search for support.

Indeed, Fed Chair Janet Yellen sounded a bit more dovish going into April and said that the economy needs extraordinary support for ‘some time’ amid the underlying slack in private sector activity, and the downward trend in price & the Relative Strength Index (RSI) may continue to take shape in the month ahead as the Federal Open Market Committee (FOMC) remains in no rush to move away from its zero-interest rate policy (ZIRP).

In turn, our game plan remains unchanged as we look for opportunities to ‘sell bounces’ in the dollar, and we will keep a close eye on the 10,470 pivot as the greenback continues to carve a series of lower highs paired with lower lows. 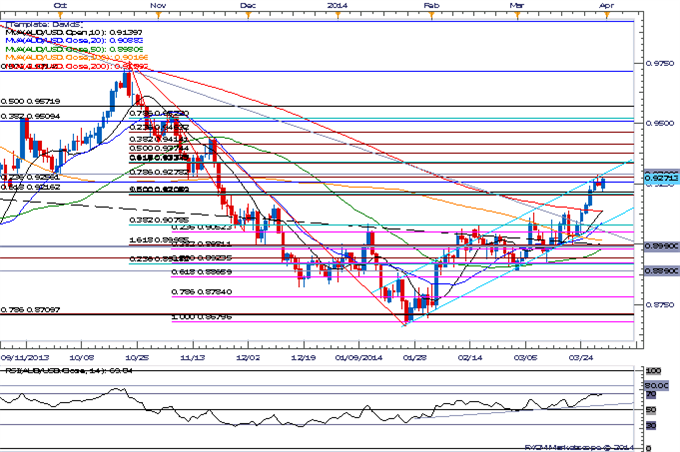 Three of the four components strengthened against the greenback, led by a 0.30 percent rally in the Australian dollar, and the AUD/USD may mark fresh highs going into April as the Reserve Bank of Australia (RBA) turns increasingly upbeat towards the $1T economy.

Fresh commentary coming out of the RBA may prop up the higher-yielding currency as Governor Glenn Stevens continues to talk down bets for a rate cut, and the AUDUSD may finally make a move above former support (0.9290) should the central bank highlight an improved outlook for growth and inflation.

However, the AUD/USD may come under pressure should Governor Stevens toughen the verbal intervention on the aussie, and the pair remains at risk for a near-term correction as the RSI continues to consolidate below the 70 region.