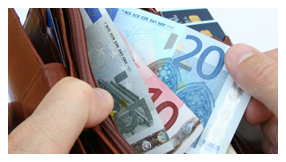 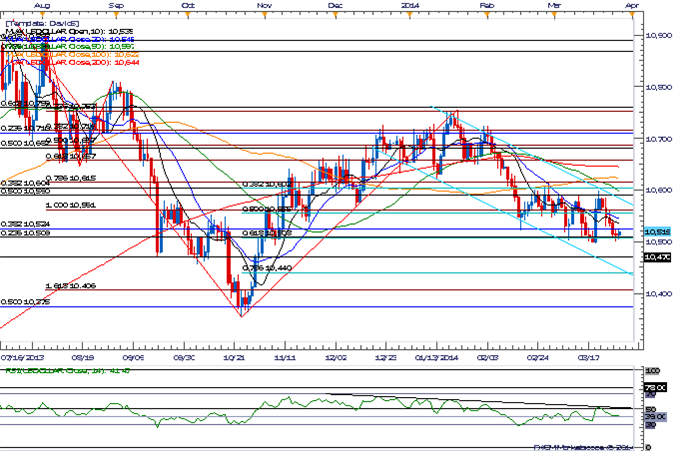 The Dow Jones-FXCM U.S. Dollar Index (Ticker: USDollar) continues to hold above the 10,500 handle going into the end of March, but technical outlook may continue to highlight the risk for a further decline should the greenback mark another failed attempt to close above 10,524, the 23.6 percent Fibonacci retracement from the September 2009 advance.

The limited reaction to the U.S. data prints suggests that the sentiment surrounding the reserve currency remains bearish, and the dollar may continue to carve lower highs & lower lows ahead of the highly anticipated Non-Farm Payrolls (NFP) report as the Federal Reserve pledges to carry its zero-interest rate policy (ZIRP) into 2015.

Indeed, Chicago Fed President Charles Evans argued that the central bank should start raising rates in 2016 amid the ongoing slack in the real economy, and a further deterioration in the interest rate outlook will continue to cast a bearish outlook for the dollar as market participants weigh the outlook for monetary policy.

With that said, we will continue to keep a close eye on the 10,470 pivot, and favor ‘selling bounces’ in the dollar as the

Price & Time: Looking for the Pound to Peter Out 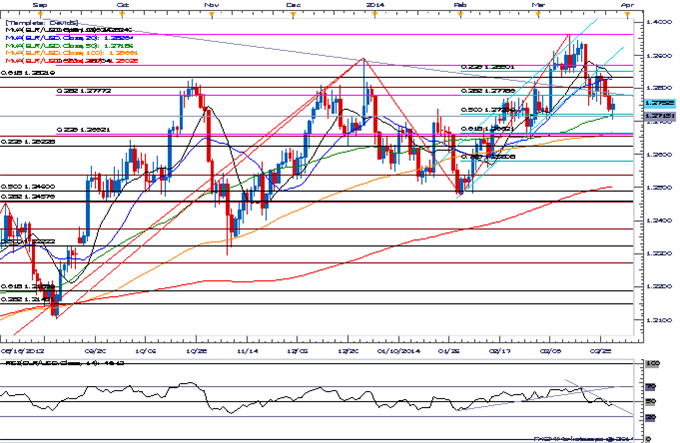 The greenback weakened against two of the four components, led by a 0.17 percent rally in the British Pound, while the Euro bounced back from a fresh monthly low (1.3704) ahead of the European Central Bank (ECB) on tap for April 3.

There’s speculation that the ECB will show a greater willingness to further embark on its easing cycle amid the persistent threat for deflation, and the single currency may face a further decline in the coming days should central bank President Mario Draghi adopt a more dovish tone for monetary policy.

In turn, the next key downside targets for the EUR/USD comes around 1.3650-60, but we will need to see a break and a close below the 1.3500 handle to favor a long-term bearish forecast for the euro-dollar as the pair remains in a correction.